The origin of Dorking chickens is a bit of a mystery. The Roman author, Columella, wrote of five-toed fowls in Rome and their description fits the Dorking well. Popular history states that the Romans brought five-toed fowls with them when they invaded Britain in 43 A.D. These five-toed fowls were respected by the Romans for their fine table qualities. Possibly, the Romans brought the five-toed Ardennes chickens from Belgium, and these were the basis for the Dorking breed. We also know that prior to the Roman arrival in Britain, Phoenician traders visited from the Mediterranean and exchange poultry for tin. 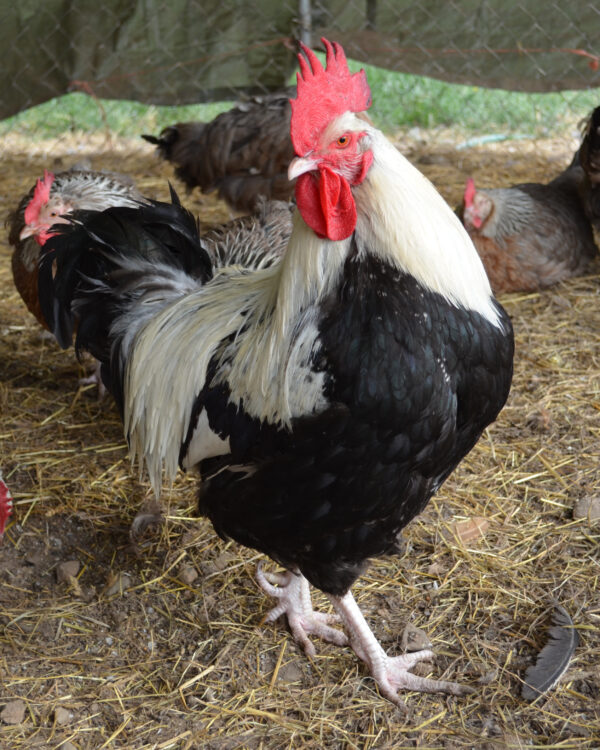 The Dorking chicken is an ancient breed likely developed in Kent, Sussex, and Surrey counties in southeast England and named for the market town, Dorking (or Darking), in Surrey. This area was famous for producing high-quality table poultry, and the five-toed Dorking was one of the most sought-after breeds.

According to a description of Dorkings by Moubray in 1815, the identifying characteristics of the Dorking were their white color and fifth toe, but once the fifth toe was a consistent feature on colored birds, they were officially considered Dorkings as well.

Exactly when Dorking chickens arrived in America is a bit of a mystery. We do know they were well distributed here before 1840 and were even shown at the first poultry show in America in 1849. By 1904 they were the most popular breed in their native England. Their popularity continued in America until the commercialization of the meat industry when the Plymouth Rock became the favorite for meat production, and the Dorking fell out of favor except as a fancier’s breed. Today, efforts are needed to improve the quality of the breed and increase their numbers.

The Dorking chicken was recognized by the American Poultry Association Standard of Perfection in 1874 in three varieties: White, Silver-Gray, and Colored. The Red variety was recognized in 1995, and Cuckoo in 1998.

The Dorking has a medium-to-large single or rose comb, except the Silver-Gray variety which only has a single comb. The single comb is bright red and upright, though it can flop a little on roosters. Silver-Gray birds have dark horn beaks; White have pinkish white beaks; all other recognized color varieties have pinking white beaks with horn streaks. They have reddish-bay eyes, red earlobes, white skin, and pinkish-white shanks and feet. Males weigh 9 lbs. and females weigh 7 lbs.

They have a long back and a broad breast, and have been described as “stocky,” or “brick-like” and “boxy-looking” in shape. They have short legs so stand closer to the ground than other chicken breed, but even though they may appear small, they provide a lot of meat.

As a table fowl, the Dorking chicken has few peers and no superlatives. The flesh is tender and delicate. The chickens are well-fleshed in the choicest sections: breast, wishbone area (“merrythought”), and wings. Early Dorking chicken breeders so valued the breed that it was only with great difficulty that live chickens could be obtained at any price. At one time, it was rumored that the town of Dorking had a law against selling the chickens alive!

Though easily fattened for the pot, a Dorking hen can lay 170-190 white or creamy medium to large eggs a year. Dorking pullets are slow to begin laying but will lay all through the winter – a time when eggs are harder to come by. Dorking hens are excellent winter layers and could be said to be very good layers except for their propensity to sit after laying 35-50 eggs. They are exemplary mothers, often staying with the chicks far longer than hens of other breeds. Dorking hens also tend to welcome chicks of other hens.

Dorkings are gentle birds, and are known to be calm, friendly, and tolerant, but likely to end up on the bottom of the pecking order if kept with other more aggressive breeds, like Cornish. The breed is not much inclined to wander far from home, though they are good foragers. They are a very friendly breed with humans. They like to roost in trees when given a chance – something unexpected of a large chicken with short legs.

They are hardy and are not considered a delicate breed. However, they do not do well with inbreeding systems, which will cause them to degrade. They can do well in any climate, though in cold climates they need protection in the winter to avoid frostbite on their single comb. A better choice for northern areas is a rose comb variety, although they can be difficult to find.

If you are willing to spend the time looking for stock and are committed to the breed, you will be rewarded with lovely, friendly birds who will provide you with delicious meat and eggs. And, you will be helping to save this wonderful breed from extinction.