The Dales Pony is one of five pony breeds native to England, the others being the Dartmoor, Exmoor, Fell, and New Forest. These breeds descend from the ancient Celtic horses of northern Europe that had migrated to the British Isles. The Dales originated in the uplands of northern England where they were used as pack animals for the lead-mining industry on the eastern slopes of the Pennines. Their close cousin, the Fell pony, was used on the western slopes.

Up until the 1800s, these hardy ponies carried loads of lead ore down to the coast from the mines. Then, they returned carrying coal, traveling 200 miles per week over rocky, rugged terrain. As the railroad became the main method of transport for the mining industry, the pony found work on hilly farms. Serving as a small draft, carriage, and riding animal. During this time the Dales Pony was bred to the Clydesdale horse to increase the pony’s size. As carriage driving became popular, Norfolk Trotter and the Yorkshire blood were introduced to add flashy knee and hock action as the ponies. The early ancestry of the Dales is obscure. Its lineage is thought to include the now extinct Scottish Galloway pony and Friesian stocks imported from the Netherlands by the Romans during the 2nd century CE. 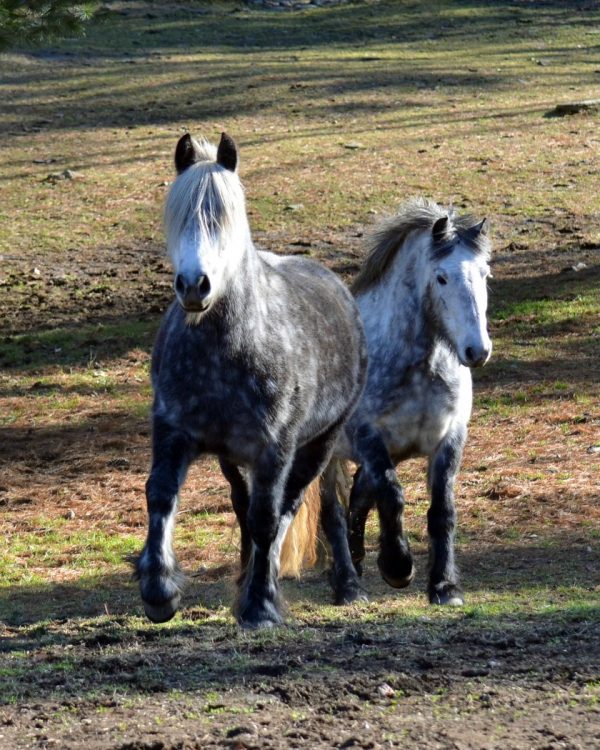 During the World Wars, the Dales Pony was drafted into the British military to carry armaments. While this was a good job, it was a dangerous one. Many Dales were killed in the wars. Most of those that survived were left behind on the European mainland. Following WWII, mechanization replaced most draft animals and many surviving Dales became food for hungry post-war Europeans. By 1955, only four fillies were registered with the breed association and breed enthusiasts recognized the crisis. Concerted conservation efforts included locating unregistered stock.

Three Fell Pony stallions were used in the 1960s to help resurrect the breed. By 1971, the breed had stepped back from the brink of extinction, and in 1991, twelve ponies were imported to Canada. By 1994, three fillies and one colt were imported to the United States. According to the Canadian Mountain and Moorland Society, the North American breed association for the Dales pony, in 1999 approximately 60 ponies were listed in the North American studbook, with the global population estimated at 800. Today the Dales Pony is valued for its stamina and shows potential as an endurance or trekking mount. It’s used in combined driving events, as well as under saddle, and can easily carry an adult rider. The Dales Pony may stand up to 14.2 hands (58”) at the withers, slightly larger than the Fell. It has a strong, compact build with feathered fetlocks, dense, flat bones, and 8 to 9-inch cannon bones. It’s known for its hard, large feet, and strong legs. Their coat color is predominantly black but some animals are brown, gray, bay, and rarely roan. On top of having tremendous stamina, the Dales is valued for its courage, intelligence, thriftiness, and calm temperament.