Temperament:
Can be aggressive to other birds; noisy; mild-mannered compared to other game birds; friendly with people

The Cubalaya is a beautiful multi-purpose chicken developed in Cuba in the 1800s by crossing Malay and Sumatra chickens imported from the Philippines with ornately-feathered European gamefowl – creating an elegant-looking triple-purpose (meat, eggs, and sport) chicken. The breed was introduced in the US and was accepted into the American Poultry Association’s Standard of Perfection in 1939 with the breed name “Cubalaya” in honor of Cuba, where the breed originated. They were also first exhibited in the US that same year at the International Poultry Show in Cleveland, Ohio. The Cubalaya is the only chicken breed that is officially recognized by the Asociación Nacional de Avicultura, the Cuban national poultry association. 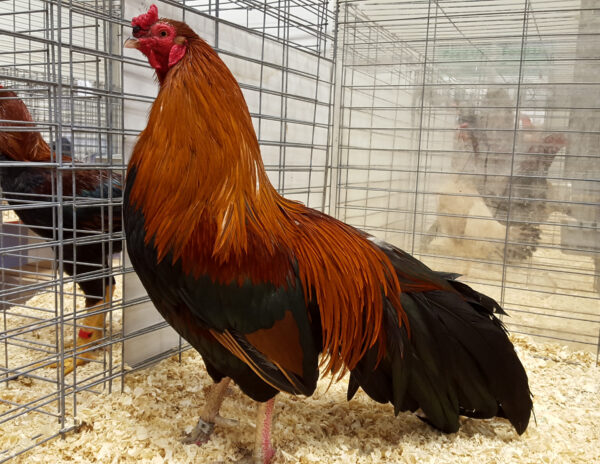 Cubalayas come in many different colors, but the official APA standard recognizes only three: white, black, black-breasted red. The most common are black-breasted red cocks with wheaten hens and solid black cocks and hens. (Wheaten Cubalayas are a dark “cinnamon” shade of wheaten which usually lightens with age.) The most favored traditional color in Cuba leans towards the blue-red wheaten, which they refer to as “ashen” (cenizo). The black variety is now believed to be extinct outside Cuba.

Their main characteristic, the unique “lobster tail”- a downward-angling tail with lavish feathering that makes it resemble a lobster claw – makes these birds difficult to confuse with any other chicken breed. The breed has a pea comb. A distinctive trait for Cubalayas is a lack of spurs, which was favored during the breed’s development and prevents young males from injuring one another during struggles for dominance. The face, comb, wattles, and earlobes of all varieties are bright red, and the eyes are reddish-bay. Black Breasted Red and White Cubalayas have white or light horn beaks, and pinkish-white legs. Black Cubalayas have dark horn beaks and slate colored legs. The skin of all color varieties is white.

They are medium-sized birds with cocks weighing 6 lbs. and hens weighing 4 lbs. at maturity. The breed matures slowly, taking up to three years to reach adulthood, although they’re capable of reproducing at six to seven months of age. They are known as producers of quality meat and can be very reliable layers of about 125-175 small/medium, roundish, tinted eggs a year. These birds do well when raised on grass and actively enjoy foraging for insects. They are not happy in confinement, and are best suited to warmer climates.

The trait most favored in Cubalayas is their tameness with people (though they can be somewhat aggressive with other breeds of chicken). Many of the chicks are friendly from the day they’re hatched and will eat out of the owner’s hand even with no previous handling. They have a generally brave disposition and, as chicks, may not fear predators unless caution is learned from their parents or other experienced birds.

Today in Cuba, the breed is dual-purpose; in the US, it is usually used as an ornamental/exhibition bird that tends to be smaller and may not be as productive as birds that are bred primarily to be used for meat and eggs.

Temperament:
Can be aggressive to other birds, noisy, mild-mannered compared to other game birds