Notes:
Has nice relaxed personality, ears should be well-rounded at the end

The first mention of the Crème d’Argent appeared in a written piece in the Live Stock Journal describing the 1877 Jardin d’Acclimatation rabbit exhibition held near Paris. The breed soon became popular and was sought after for producing fur trimmings, which were used on fashionable garments of the time. 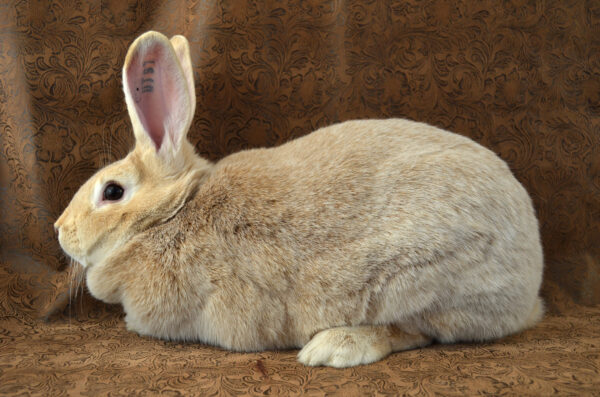 The first Crème d’Argents arrived in America prior to 1924 and were imported by several individuals in the New York state area. These first importations were bred pure and crossed with other breeds, such as the Golden Palomino. The “Americanized” Crème d’Argent was developed to have a meat type, unlike those that matched the original European standard for this breed.

In America, Crème d’Argent rabbits were first shown at the Fort Wayne, Indiana, Convention and Show in 1936. A working standard for the breed was established in the U.S. in 1938. Today, the breed has become extinct in all countries except the U.S. and United Kingdom. The global population is estimated to be less than 1000 animals, according to the American Rabbit Breeders Association and the Crème d’Argent Rabbit Federation (2006).

The Crème d’Argent is creamy-white in color with an orange cast carried throughout the fur of the body. The undercoat is bright orange and this color carries to the skin. The entire coat is interspersed with orange guard hairs. These rabbits are considered a large breed with the bucks weighing 8 to 10.5 pounds and does weighing 8.5 to 11 pounds. The does are reputed to be good mothers that average 5 to 8 kits per litter. Crème d’Argents have a relaxed and likable personality, which makes them a good choice for those new to rabbits.

Notes:
Has nice relaxed personality, ears should be well-rounded at the end