Characteristics:
One of the best broody breeds, especially for turkeys and ducks; good in cold climates; excellent capon at 12 months of age

It’s doubtful that any other single breed of chicken has inspired more people to keep poultry than the Cochin.

According to “Popular Breeds of Domestic Poultry” published in 1923, the breed was developed in the Province of Shantung, north of Shanghai, and was called “Ju-chin” there. The name means “nine picules”, with a picule meaning 1¼  pounds. These birds were large and rather tall, and were moderately/scantily feathered, and came in a large variety of colors. Importation records of Cochins (sometimes called Shanghai chickens) go back to about 1846, but it is likely they were brought to America for at least a half-century before that. 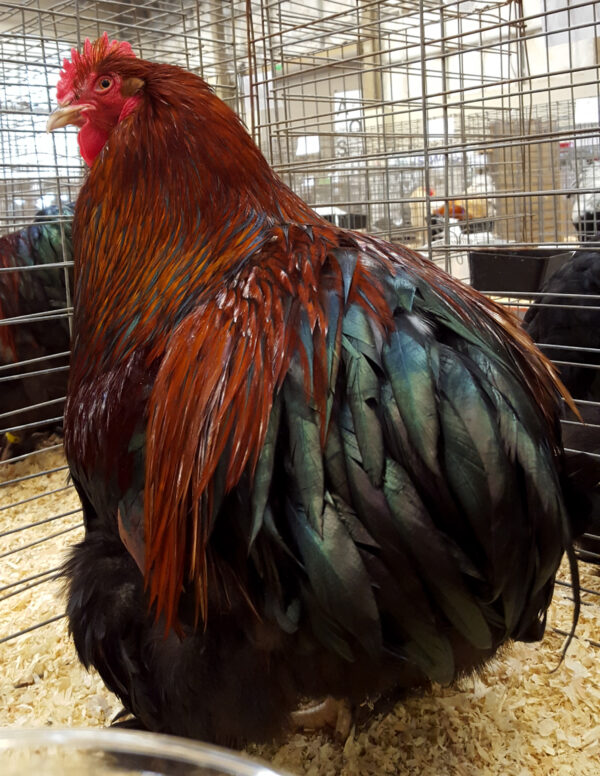 The breed first became popular when imported birds were given to Queen Victoria in England, starting what became known as “hen fever” – a national obsession for all things poultry that overtook America and England in the mid-1800s. When this breed made its debut outside of China, it was met with astonishment, wonder, and awe.

It was developed to have tolerably good table qualities at 12 weeks, but it excelled as capon that was best harvested at 15 to 16 months when it weighed about 12 pounds. Meat texture at other stages of harvest was found to be coarse, and the breed’s meat tended toward a larger portion of dark meat than breast meat. However, as it was never a particularly great meat bird, Cochins are rarely used as meat birds anymore.

Although promoted with great enthusiasm as a productive, all-around breed, Cochins never reached commercial success. Stephen Beale in his 1895 book, Profitable Poultry Keeping, wrote that, “…the Cochin then and now being the least profitable of all of our breeds of poultry… [1850-1895].” They were admitted to the American Poultry Association Standard of Perfection in 1874.

The Cochin is a large bird and, with their fluffy feathers, these chickens can seem enormous. From the side they resemble a heart-shaped fluff ball. Their feathering is full and soft and not tight like those of the Rhode Island Red. They feather slowly, but are very hardy and, like the Brahma, can thrive in conditions where other breeds would perish. The feathering extends down the legs to the feet and toes, with only the inner two toes being naked. (They are born with feathering on their feet!) All that feathering makes them cold-hardy, but they suffer in the heat and need shade and cool areas so they can escape the summer sun.

Cochin chickens have small rounded single combs in hens and medium size in roosters. They have small, well-rounded wattles in hens and long wattles in roosters. They have red earlobes. Roosters weigh 11 lbs. and hens 8.5 lbs. They represent all the best in maternal characteristics and will, when not brooding, supply 150-200 medium/large brown eggs per year. (Note that the breed is slow to develop and may not begin laying until they are about 8 months old.) However, Cochins are predisposed to becoming too fat which can stop egg production and even lead to death from liver disorder. Lewis Wright, in his 1892 book The Practical Poultry Keeper recommended that Cochins should receive a daily ration of green food to keep them healthy.

As a broody fowl, they have no equal; Cochin hens are inclined to broodiness and will hatch more than one batch per year, if allowed. Even roosters will occasionally brood the chicks, though Cochins tend to wean the young too soon if they are used to hatch chicks while it is still cold. They are considered the best fowls for hatching and brooding ducks and turkeys. However, due to their size, care must be taken when having them sit thin-shelled eggs.

Due to their weight they don’t fly, and they require low roosts. It is important to make sure pens do not get muddy, especially in cold weather, as their feathered toes can easily suffer frostbite if they get mud caked.

They are great eaters and are indiscriminate in their preferences. Their ability to forage combined with their profuse feathering makes them an ideal choice for colder climates, and gives them the ability to eat enough to produce both animal heat and eggs during the heart of winter.

Of all the unique characteristics of this wonderful poultry breed, one stands out above all others: their personality. Cochins are noted for their extremely gentle dispositions. Males rarely become aggressive or even quarrel (although this is not as true in the Bantam version of the breed). They’re easily tamed and may find themselves more suited to your home than your poultry yard. They are not inclined to wander, nor do they scratch as profusely as other breeds. A fence two feet tall will keep them contained and they readily accept confinement. It is said that Cochins, even under adverse conditions, immediately set out to make themselves comfortable.

Cochins are a good breed for those looking for a large, impressive chicken that has a docile, gentle disposition. Ideal flock-mates are other non-assertive breeds.

Characteristics:
One of the best broody breeds, especially for turkeys and ducks, good in cold climates; Excellent capon at 12 months of age