The Clydesdale is a draft horse breed from Lanarkshire, Scotland whose name derives from the River Clyde. Their history goes back to the mid-1700s when native stocks were mated with larger Flemish horses and then selected for use in agriculture and for all types of heavy hauling, including transport through the streets of Glasgow. Clydesdale horses were first exhibited under the breed name in 1826, and were further standardized through the system of hiring out purebred stallions. The Clydesdale Horse Society was formed in 1877, and its breed registry records go back to the 1830s. 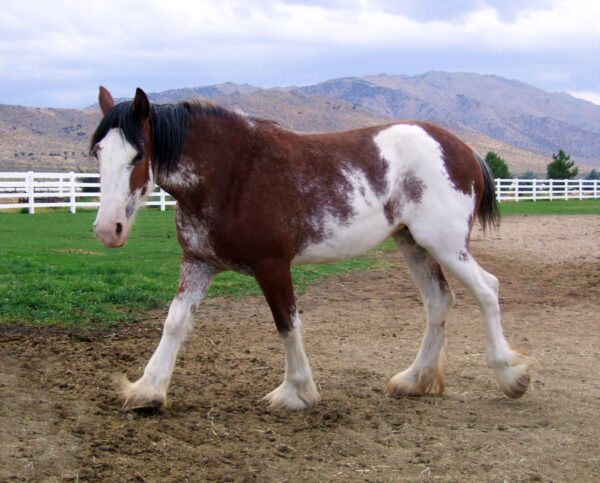 The Clydesdale was first imported to North America in the 1840s. The breed’s attractiveness and size led to its use in promotional hitches, such as one sponsored by the Chicago Stockyard Company. In the 1930s, the Anheuser-Busch Company of St. Louis, Missouri, began to use a hitch of Clydesdales to celebrate the end of Prohibition and to represent the company’s products. The “Budweiser Clydesdales” were an immediate sensation when they delivered the first post-Prohibition beer to the White House, and the hitch has proven to be one of the most popular and successful advertising symbols of all time. Less well known is the fact that Anheuser Busch has maintained a Clydesdale breeding program since 1953, and that the company’s commitment to the breed during the 1950s and 1960s was critical to its survival in North America.

The Clydesdale combines strength and style. The breed’s action is distinctive, with each foot lifted cleanly off the ground so that the bottom of the foot is visible from behind. The forelegs are well planted under the shoulders, the legs are straight, and the feet are durable. Clydesdales should have breadth between the eyes, with a flat facial profile and a wide muzzle. The withers are high, the back short, and the quarters long and well-muscled. The most common color is bay, though black, brown, chestnut, and roan are also seen. The Clydesdale resembles the Shire, and the breeds are related.

As with many breeds of livestock, Clydesdales have evolved during the 1900s to meet the changing demands of the times. In the early 1900s, the market favored a compact animal. More recently, breeders have selected taller horses to be used in fancy hitches and in the show ring. Today’s Clydesdales stand 16.2 to 18 hands (66–72″) at the withers and weigh 1,600 to 1,800 pounds. The largest individuals are taller, weighing as much as 2,200 pounds.

The North American population of Clydesdale horses had increased steadily for several decades, but a sharp decline began around 2010, prompted by the economic downturn that affected the entire equine market. Globally, the breed is well known but not common, with an estimated global population of fewer than 5,000 horses.