The Choctaw hog is an American swine breed that descends from Spanish stock brought to the Americas beginning in the 1500s. Native Americans, European colonizers, and a succession of other peoples in the Southeast used Spanish hogs for over three hundred years. The modern breed’s name comes from the Choctaw tribe, with whom it has been associated for centuries. 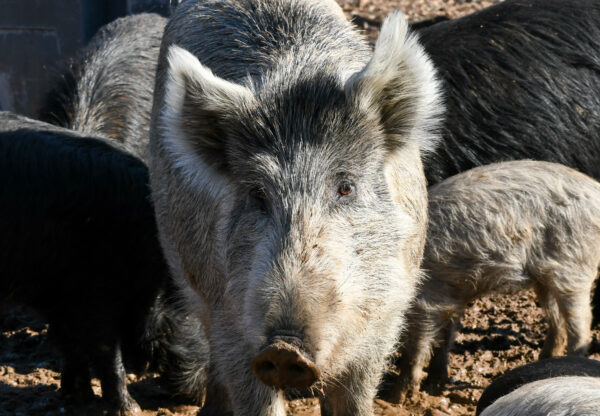 When the Choctaw and other Native American tribes migrated from the deep South to the Oklahoma Territory in the early 1800s, they took their animals with them. This was the beginning of the Oklahoma Choctaw hog population. In the 1830s, the United States government removed the Cherokee, Chickasaw, Choctaw, Creek, and Seminole tribes from Mississippi and Alabama, forcing them to move to Oklahoma. Their hogs were also taken in this migration.

Choctaw hogs have changed little in appearance during the past 150 years. They’re small in size, weighing about 120 pounds, and are black with occasional white markings. The ears are erect to slightly drooping. Many Choctaws hogs have fleshy wattles on each side of the neck. The toes are fused, forming a single, mule-like hoof. The combination of the distinctive hoof and wattles are consistent with the breed’s Spanish origin, and these traits are often found in populations that descend from Spanish stocks. For example, Mulefoot hogs share some of their physical characteristics with the Choctaw hog, though the two breeds have diverged over the past century and are now distinct from each other. Choctaw hogs are also distinct from the “Pineywoods Rooter” and other genetically mixed feral hog populations still found in the Southeast.

The Choctaw breed was shaped by natural selection, and it’s obvious that these hogs are built for survival. They have long legs and are heavier in the forequarters than in the rear, making them both fast and athletic. This conformation has its advantages in the wild, but it does not produce much of a market carcass.

Today, Choctaws in Oklahoma are managed as they were traditionally. They’re earmarked and allowed to roam free on the open range. The hogs require little care and are able to forage for their own food, including roots, plants, acorns, and berries. Periodically, the hogs are rounded up, usually being trailed with dogs and then trapped. Once captured, the young ones are ear marked and sorted. Those slated for market are confined and fed on corn to increase their weight. Those not needed for sale are released, zipping back into the woods as quickly as they can. People familiar with docile barnyard animals are amazed at the speed and agility of Choctaw hogs. At the same time, Choctaws kept in confinement can also become quite tame.

The Choctaw breed is critically rare, with a population estimated at a few hundred animals. Almost all of them are found in the few counties of southeast Oklahoma that were formerly the Choctaw Nation. Few commercial opportunities are available for the breed’s use, and lacking any economic return to support conservation efforts, the Choctaw faces substantial obstacles to survival. Nevertheless, the breed is a high conservation priority because it has qualities, which may be of importance in the future.