Chinese geese are considered by many to be the most graceful and beautiful member of the goose family. They’re elegant and dignified on both land and water. Sometimes they are referred to as “Swan Geese” because of their long and graceful necks – in fact they descend from the Asian wild Swan goose. They are known as “Höckergänse in Germany and “Oies de Chine in France”.

The Chinese goose was known in North America in the Colonial period, and according to his personal records, George Washington was gifted with some at his home in Mount Vernon. The Brown and White varieties were admitted to the American Poultry Association’s Standard of Perfection in 1874. In 1876, Chinese geese were exhibited as “Chinese Swans” at the Centennial International Exhibition during the first official World’s Fair in the US, which was held in Philadelphia. 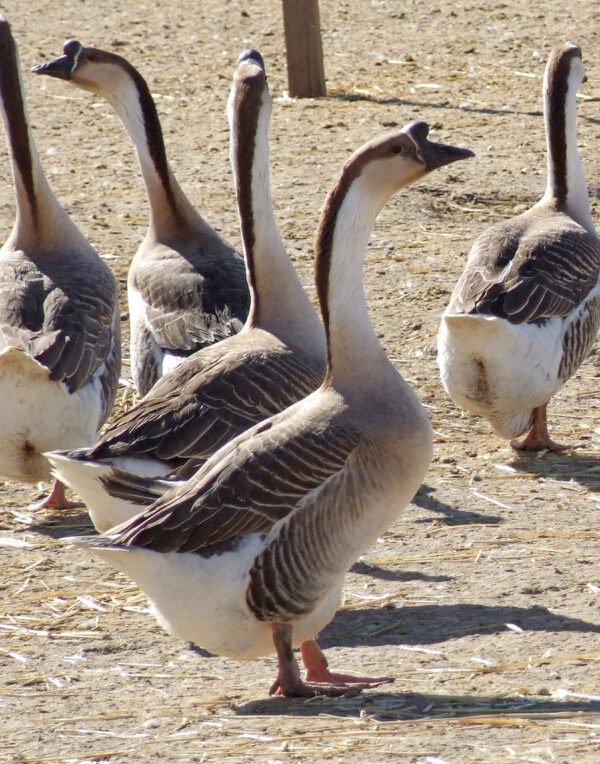 The Chinese goose is refined and curvaceous. Its bill is relatively long and slender, with a large, rounded, erect knob on its forehead. The breed holds its head high; its head flows seamlessly into a long, slim, well-arched neck which meets the body at about a 45-degree angle. Its body is short and compact; it has a prominent and well-rounded chest, smooth breast, and no keel. Its abdomen is moderately full but has no fatty lobes, except during the laying season when the female may develop a single lobe. The tail should be held high, and a high set tail is a good indication of vitality in ganders. A Chinese goose is often heavier than it appears as its feathers are closely fitted. Mature ganders average 12 lbs. while mature geese average 10 lbs.

There are two color varieties of Chinese geese: brown and white. The original variety is a rich brown and fawn, accented by a dark, russet-brown neck stripe. In mature birds, the glossy black bill and knob are separated from the main head plumage by a narrow band of creamy-white feathers. The shanks and feet are brownish-orange or dark orange, and the eyes are brown. The white variety has blue eyes, pure white plumage, and bright orange feet, knobs, and bills. While goslings of white European breeds are mainly gray with yellow trim, the down of day-old White Chinese is a bright canary yellow.

When selecting breeding stock, “pick birds with compact bodies, prominent chests and keelless breasts, wings that fold in front of an erect tail, slender and symmetrically arched necks and large, rounded knobs that rise well above the crown of the head. A spry, upright carriage is important in Chinese since it is a sign of good health and vigor. Avoid breeding from specimens with drooping shoulders, roach backs, deformed necks, and long bodies.” (Holderread, 1981).

Chinese geese are a hardy breed; however, their knobs can freeze when temperatures fall below 20 to 25 degrees Fahrenheit. It’s important to provide the flock some protection during freezing weather.

Chinese geese are exceptionally practical. They are the best layers of all the breeds, produce less greasy meat, and are easier to sex at maturity. With good management, the average Chinese goose produces nearly twice as many goslings as other geese, laying 40-100 large, white eggs annually. “A ratio of four to six geese per gander, rather than allowing a one-to-one pairing, reduces competition in the flock.” (Holderread, 1981).

Geese eat many grasses and herbaceous plants. If properly managed, Chinese geese can be employed as “weeders” due to their active foraging habits, moderate size, agility, and good availability. Poultry catalogs sometimes refer to them as “Weeder Geese.”

Chinese geese are an economical breed. Stock is generally less expensive than other breeds. Their smaller size coupled with their active foraging ability means they don’t require as much food as other breeds. They do well in a mixed flock of geese and ducks. For those looking for “watchdogs,” Chinese geese are an excellent choice for the home flock; because they are alert and vocal, they will raise an alarm if a threat is perceived. Some strains are assertive, but some strains and goslings handled and trained from early on can make excellent pets and bond closely with their owners.