Characteristics:
Winter hardy; winter layer; can be eaten at any age

Named from the French words ‘chanter,’ meaning “to sing,” and ‘clair,’ meaning “bright,” the Chantecler is considered the first Canadian chicken breed. Brother Wilfred Chatelain decided to develop the breed while he was walking through the flocks of the Cistercian Abbey of Notre-Dame du Lac in Oka, Quebec and realized there were no chicken breeds that had been created in Canada. He sought to create, “a fowl of vigorous and rustic temperament that could resist the climatic conditions of Canada, a general-purpose fowl.” The Chantecler was created by first crossing a Dark Cornish male with a White Leghorn female, and a Rhode Island Red male with a White Wyandotte female. The following season, pullets from the first cross were mated to a cockerel from the second cross. Selected pullets from this last mating were then mated to a White Plymouth Rock male, producing a pure White Chantecler. Although work began in 1908, the breed wasn’t introduced to the public until 1918, and was admitted to the American Poultry Association Standard of Perfection in 1921. 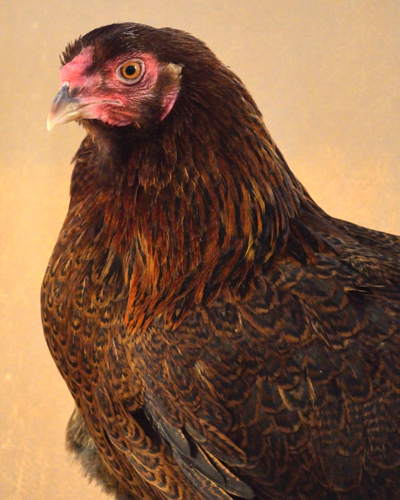 The Chantecler chicken is an exceptional dual-purpose breed. Not surprisingly, the breed is noted for being very hardy, lays up to 220 light brown/pinkish eggs per year, is a good winter layer, and has a well-fleshed breast for good meat production. They can go broody.

The breed is noted for having nearly no wattles and a small red cushion comb, which appears like a small round button sitting low on the head. The small comb and wattles allow the breed to withstand cold winters without the worry of frostbite. Their eyes are reddish bay. The Chantecler can still be found in both of its original colors, White and Partridge; both have yellow flesh and legs. The beak is yellow on the White and dark horn shading to yellow at the point on the Partridge. Males weigh 8-9 lbs. and females 6.5-7.5 lbs.

It is an excellent choice for anyone wanting a productive fowl that will excel in a winter climate. They do not do well in warm climates. They can handle being confined and free-ranging equally well. The breed is noted for being calm, gentle, and personable if they are handled regularly as chicks, and they get along with other breeds of chickens.

This breed can be hard to find, but is worth the effort if you want chickens that can thrive in a northern climate.

Characteristics:
Winter hardy, winter layer, can be eaten at any age