The Canadian horse was developed from equine sent from France to Quebec between 1665 and 1670. The limited number of horses in the colony made them highly valued, and geographical isolation meant that the stock remained pure. 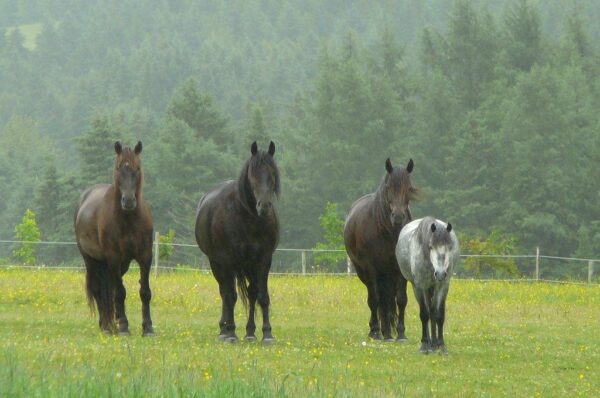 Over the next century, natural and human selection molded a rugged and versatile breed that’s strong, dashing, and quick. The Canadian was used for farm work, transport, riding, and racing, earning the nickname “little iron horse.” Canadian horses could excel at any task they were put to.

By 1800, the breed had become well known in the United States. Canadian horses were used on stagecoach routes throughout New England. They were also used to improve other stocks and develop new breeds, playing a pivotal role in the formation of the Morgan, American Saddlebred, and Standardbred. Though Canadian horses were celebrated for what they could do, no breed association was ever established in the U.S., and there was no documented effort to maintain a purebred population in the country.

The market for Canadian horses was strong throughout the 1800s and thousands of horses were exported from Canada to the U.S. Many of them became cavalry horses and were killed in the Civil War. So many horses were exported or lost that by 1880, the breed was nearly extinct in Canada. In 1886, a small group of breeders in Quebec formed a studbook for the Canadian horse.

An association, the Societe des Eleveurs des Chevaux Canadiens, was formed in 1895. Both the federal government of Canada and the provincial government of Quebec maintained breeding programs periodically, but in 1976, fewer than 400 horses remained. Since then, the breed society was revitalized and is successfully promoting the Canadian as a family horse and national treasure all across Canada. There are an estimated 2,000 Canadian horses alive today, and the future of the breed is looking brighter than at any time in the past century.

The Canadian stands 14 to 16 hands (56-64″) at the withers and weighs 900 to 1000 pounds. Canadian horses are solid and well-muscled, with a well-arched neck set high on a long, sloping shoulder. The overall impression is one of a round, sturdy, and well-balanced horse. Canadians are primarily black or bay, with full manes and tails. They are energetic without being nervous, and, as appropriate to their heritage, versatile and adaptable for a variety of riding and driving disciplines.