The Blanc de Hotot is a large white rabbit with black bands around each eye. The breed was developed in Hotot-en-Auge, Normandy near the port of Le Havre in northern France. The Blanc de Hotot, meaning White of Hotot, was created by Eugenie Bernhard, chatelaine du Calvados. She kept a large rabbitry of Flemish Giants, Géant Papillon Français (Checkered Giants), and Géant Noir de Hotot and is the second woman to ever be credited with developing a new breed of rabbit. 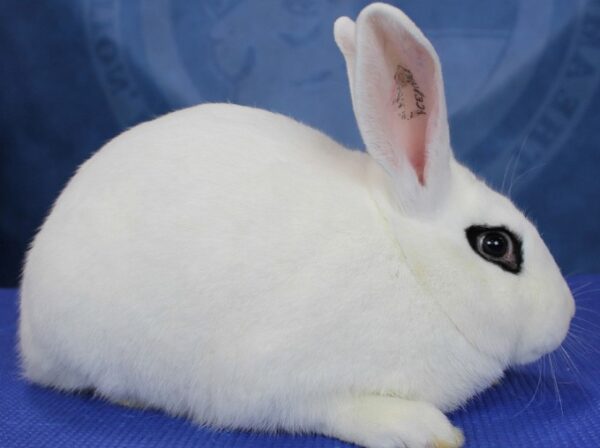 Bernhard’s breeding goal was a rabbit used for meat and fur, with a white coat and black eyes. Sometime around 1902, she crossed the Papillon with White Vienna and White Flemish Giants, but progress toward her goal was slow. She saved only the lightly marked animals that were the product of 500 crosses, and by 1912, was eventually able to produce the rabbit we have today. Bernhard continued to be troubled by the thin black eye bands.

The breed was shown for the first time in 1920 at Exposition Internationale d’Aviculture in Paris as the Geant (Giant) Blanc de Hotot. The French rabbit governing body recognized them as a breed on October 13, 1922. The first French standard doesn’t mention eye bands, but, instead, black eyelashes and lower eyelids that were more or less colored gray. The Blanc de Hotot was brought to America in 1921 to 1922, but they soon died out. Switzerland imported them in 1927, and it was the Swiss that appreciated the eye markings. During World War II the Blanc de Hotot nearly vanished in France, Holland, and Germany. However, even though the breed isn’t very common in Europe, its population continues to grow with approximately 111 Blanc de Hotot breeders documented in France in 2010 according to the Fédération française de Cuniculiculture.

In 1978, Bob Whitman of Texas imported 8 Blanc de Hotots from Fernand Eberli of France. The breed was recognized by the American Rabbit Breeders Association’s standards on March 5, 1979. Because of the very small gene pool and a body type that greatly needed improvement at the time, breeders began to cross Blanc de Hotots with Blue-Eyed White Beverens, White New Zealands, and White Satins. It was not until 2004 that additional Blanc de Hotots were imported into this country from Germany, Holland, and England. Though recent imports from Germany to the state of Washington in 2009 and from France to Nova Scotia, Canada in 2013, the Blanc de Hotot is an endangered breed in North America.

The breed is known for its lustrous fur, an abundance of guard hairs that gives the fur a frosty white sheen, and its striking black eye bands, which shouldn’t be over an eighth of an inch wide according to ARBA and not over 5mm in most European standards. Rigid selection is necessary to assure the proper markings. The Blanc de Hotot is a large rabbit with bucks weighing 8 to 10 pounds and mature does 9 to 11 pounds. They are an active, hardy breed and are easily raised in all wire cages. They are fairly good mothers, have good-size litters, and the young grow rather fast.

Though a recent import to the United States, the Blanc de Hotot is a globally endangered breed.