The once famous Belgian Hare is the breed responsible for the United States’ domestic rabbit movement. Although the original rabbits can be traced to Belgium, the credit for their perfection is given to the British. The London Zoological Gardens imported a few rabbits for display as early as 1856, but it was Winter “William” Lumb and Benjamin Greaves who had the greatest impact on the development of the breed after their importation of several animals from Antwerp in early 1873. Some claimed the Belgian Hares were actually a fertile mule – a cross between a rabbit and the European hare – however, Winter Lumb prevailed in his stand that it was a rabbit bred to resemble wild hares. 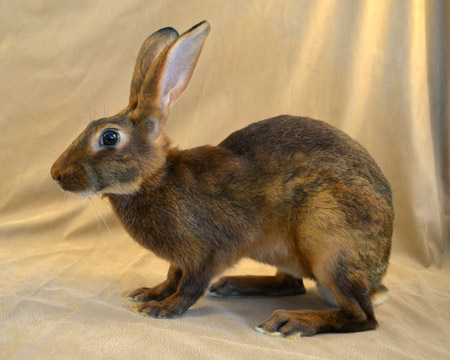 Belgian Hares first reached America in 1888 when E.M. Hughes of Albany, New York imported a few rabbits. Hughes, along with W.N. Richardson of Troy, NY and G.W Felton of Barre, Massachusetts, founded the first rabbit club in America, the American Belgian Hare Association. The club only lasted a year and was later replaced by another club organized in 1897. What became known as the “Belgian Hare Boom” took the country by storm. From 1898 to 1901, thousands of Belgian Hares were imported to America. The British shipping firm of Sutton & Company alone “safely conveyed” over 6,000 Belgian Hares to the U.S. in 1900.

Rabbits were exchanging hands for hundreds and thousands of dollars, with a record price of $5,000 paid for one male in 1900. Large companies dealing with Belgian Hares were established and Belgian Hare Clubs could be found in nearly every major city. Millionaires of the day, such as J. P. Morgan, Rockefeller, H.M. Flagler, Dupont, and the Guggenheims, saw the money-making potential of this popular rabbit. Los Angeles County alone boasted over 60,000 animals in 1900. The market had become so heavily saturated, however, that prices for stock dropped to less than $25.00 for a fine exhibition animal. Despite the fact that Belgian Hares were common menu fare, the breed continued to decline due to the development of other more commercial breeds. By the 1940s, Belgian Hares became a scarce animal in U.S. showrooms, as it had throughout the world. Dedicated fanciers worldwide struggled to keep the breed from extinction.

Belgian Hares are a very racy and fine-boned breed of rabbit, with a deep rich red color that has black-waved ticking to the fur. The type and fur qualities are lost when crossed with other breeds. While not considered the hardiest of breeds, they are an active rabbit that typically requires wooden-floored hutches heavily bedded with shavings and straw. Belgian Hares do not do well with extremely high humidity or heat. They are fair mothers and litters will average 4 to 8 kits. Youngsters are slow to mature. Mature bucks and does will weigh 6 to 9 pounds.