“In the Vale of Aylesbury, forty miles north of London, Buckinghamshire ‘duckers’ were renowned by 1800 for the production of England’s finest white-skinned market ducklings.” (Holderread, 68) Aylesbury ducks were held in high esteem not only for their white skin and unusual pink bill, but also for their large size, ability to produce eggs in the winter months, fast growth, light bone, and high percentage of mild-flavored meat. (Holderread, 68) This duck breed was one of the first to arrive in the United States from Europe. Aylesburys were exhibited in 1849 at the inaugural poultry show in Boston, Massachusetts, and were included in the first publication of American Standard of Perfection published in 1874 by the American Poultry Association. (Holderread, 70) 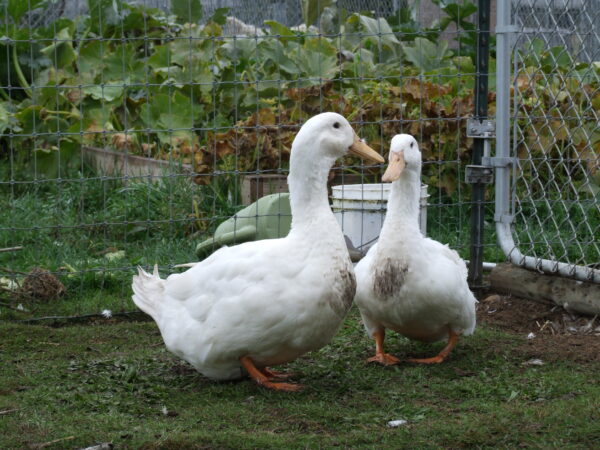 The Aylesbury duck is a superior meat breed with mature males weighing around 10 lbs. pounds and mature females, 9 lbs. (Malone et. al.) Young Aylesbury ducks will reach slaughter weight – about 5 lbs. – in seven to nine weeks and, because they’re not particularly active foragers, will fatten best if fed concentrated feed. It’s the meat breed of choice in England, preferred over the Pekin favored in the United States, because its flesh is considered more flavorful. Females will lay 35-125 moderately sized, white or tinted-green eggs per year, (Batty) with one leading breeder, Frank Reese, Jr., stating that his birds consistently lay near the high end of this range.

The Aylesbury duck has pure white plumage, white skin, (a unique attribute since most ducks have yellow skin) orange feet and legs, dark grayish-blue eyes, and an unusually long, straight pinkish-white bill. It has a long body, horizontal carriage, and a characteristically straight, deep keel that nearly reaches the ground. The Aylesbury is described as slow-moving, and exceptionally tame. (Holderread)

There are two types of Aylesbury – exhibition and utility. The exhibition bird has a very deep keel which makes it difficult for this type to successfully mate naturally. The utility-type Aylesbury is able to mate naturally, especially if they’re protected against obesity by being allowed to be active. (Reese) For top fertility, breeders should be fed a ration that contains 18 to 20 percent protein and is well fortified with vitamin-rich substances like alfalfa meal, cod-liver oil, or a vitamin premix. (Holderread)

There is a critical need for more conservation breeders of Aylesbury ducks. They are generally a friendly breed, so they make good pets. Their large size, white skin, and white plumage make them an excellent market bird and a great addition to any small farmstead or backyard producer’s flock.