Temperament:
Docile; Calm with people and other pets

Characteristics:
Can fly; Not good with predation – needs protection; Not recognized by the APA

Despite its “down under” name, Australian Spotted ducks originated in the United States. They were developed in the 1920s by John C. Kriner and Stanley Mason of Pennsylvania with a foundation stock of Call, Mallard, Northern Pintail, and an unidentified wild Australian duck. These breeds were kept together and allowed to interbreed for several generations. The preferred offspring were then selected and bred, thus forming the new breed. In 1990, the Australian Spotted became more readily available to the public, but its overall numbers still remain low.

“The Australian Spotted is a bantam breed whose weight averages 2.0 to 2.2 pounds. Its body is teardrop-shaped and its legs are centrally located, making the body carriage almost horizontal. Heads are oval and moderately streamlined without the distinctively high forehead and puffy cheeks of a Call duck. 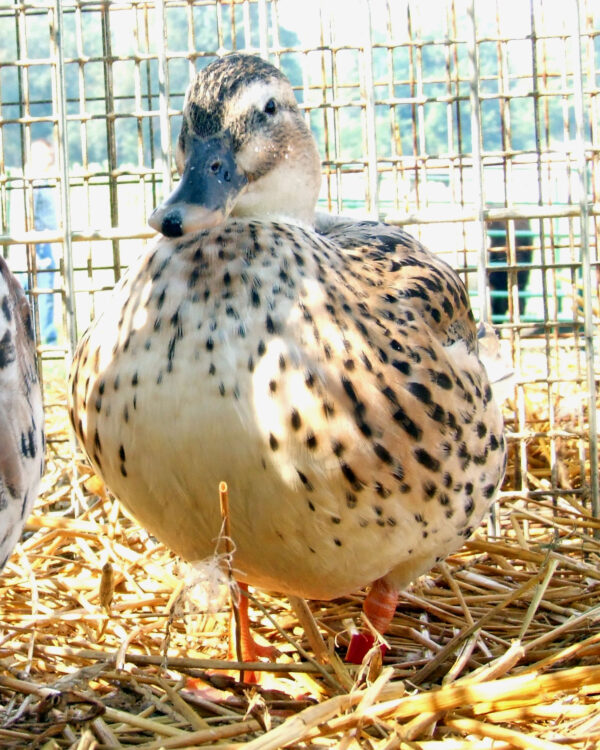 The Australian Spotted duck’s coloration is complex. Depending on the variety, the drake’s head is green (Greenhead), blue (Bluehead), or silver (Silverhead). (Snowy-headed birds are not acceptable.) A white band encircles the neck, the sides of the body and breast are deep burgundy, and the center of the breast extending under the body is white. The middle of the shoulders and back are dark gray, wings are a dark grayish-brown, the tail is light gray, and the tail undercushion is black. The bill is greenish-yellow, the eyes are brown, and the shanks and feet are orange. The Greenhead Australian Spotted duck’s body, head, and neck are a fawn color, spotted with dark brown. The Bluehead and Silverhead’s colorations are the same as the Greenhead, except the Bluehead’s flecking and spots are bluish-gray; and the Silverhead’s flecking and spots are silver. When choosing breeders, select active, bright-eyed, strong-legged birds. Color patterns should conform to the descriptions offered above and the weight should approach the standard. Australian Spotted Ducks are not currently included in the American Poultry Association Standard of Perfection.

Australian Spotted ducks are the best layers of the bantams and will produce 50 to 125 cream, blue, or green-shelled eggs yearly. This breed is a fast-maturing duck, with drakes normally expressing courtship behavior when three to four weeks old.

Although their meat is said to be delicious, they are not normally raised for their meat due to their rarity. “Despite their small size, the Australian Spotted has well-developed breast muscles and extra-fine textured meat, all of which add up to a delectable single-or-double-serving sized duck.” (Holderread)

Along with their diminutive size and delightful plumage, Australian Spotteds have proven to be personable and calm with people and other pets. They are exceptionally hardy and excellent foragers that are a great help in reducing slugs, snails, sowbugs, Japanese beetles, other insect pests in gardens and yards, and will eliminate mosquito larvae from ponds and pools.

They’re active fliers but will generally stay close to home. Clipping the primary flight feathers of one wing will help ensure this. Due to their size and ability to fly, it is important to provide housing and fencing that will protect them from predation.

This is a good breed for beginners and families, but due to its rarity, it may be difficult to obtain.