The Arapawa is a breed of domestic goat whose ancestors arrived with European explorers or colonists in New Zealand as early as the 1600s. The breed was originally only found on the rugged island of Arapawa, which is situated at the top of the South Island of New Zealand.

The origin of the goat population on this island has often been associated with the expeditions of Captain James Cook. Historical records indicate that goats were released by Cook on the island in 1777. According to local lore, the present goats are directly descended from the original ones brought by the British explorers. The goats were once thought to be descended from “Old English,” a common goat breed in Britain in the 18th century, but more current DNA evidence has shown these goats have a unique identity and suggests that they may be distantly related to some South African breeds. This discovery is historically consistent as ships often took on African livestock on their trips around the Cape of Good Hope to Australia and New Zealand. 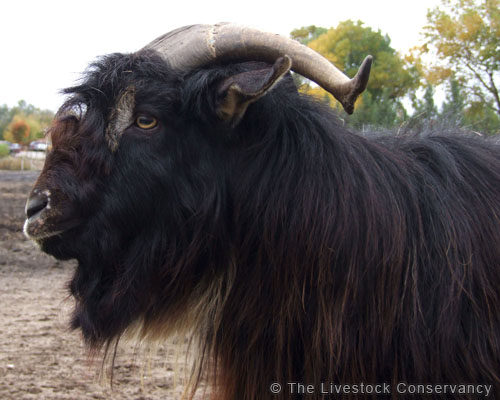 The Arapawa goat population thrived on the island without major threat for hundreds of years, until the 1970s. At that time, the New Zealand Forest Service concluded that the goats were too damaging to the native forest and had to be removed. In reaction to the news, in 1987 Arapawa Island residents Betty and Walt Rowe stepped in with friends and volunteers to create a sanctuary for the breed. They began conservation work with 40 goats returned to domestication. It is largely through their efforts that the breed gained international attention and survives today. The Arapawa remains one of the rarest goat breeds. As of 2011, there were approximately 150 to 200 domesticated goats in the United States, representing about half of the global population. Dedicated breeders are also working with the breed in New Zealand and the United Kingdom.

Documenting the origins of the goats released on Arapawa Island almost 250 years ago is important in understanding the genetic resource represented in the goats. In 2007, The Livestock Conservancy, through its Technical Advisor Dr. Phil Sponenberg, joined the University of Cordoba and several Arapawa goat breeders to perform DNA analysis of the breed. The study found that Arapawa goats are clearly distinct from other breeds. What is certain is that the hardiness and self-sustaining abilities of the goats make them a unique genetic resource.

Arapawas are considered medium-sized goats, with does weighing 60 to 80 lbs. and bucks weighing up to 125 lbs. They have long hair and are predominantly black, brown, and white in varying combinations with many having badger stripes on their faces. Does typically give birth to twins with little to no birthing difficulties and possess excellent mothering skills from the start.

The Arapawa is a non-aggressive breed, which, if handled early in life, makes for an excellent family dairy and meat goat. They become attached to their goat family group and their human keepers, so they can be a good choice for children.

They are escape artists, able to squeeze through small spaces and jump, so they require appropriate fencing. They do not like to be out in very wet weather, so the need to have shelter to which they can return. They excel at clearing brush and weeds. They are generally a healthy breed and hardy, and are worth maintaining as a unique genetic resource.