For many years, the origin of Ancona ducks was speculated to be in Britain. However, after extensive searches in the United States and Great Britain, newly found information points to the breed being created in America.

The strongest piece of evidence comes from an article published in the 1913 edition of the Water Fowl Club of America Yearbook. In it, W. J. Wirt of Ridge View Farms in Knowlesville, New York, announced the development of the “Ancona,” a new duck breed he named after the Ancona fowl. The new breed was developed from a combination of several standard duck breeds.

Shortly after, Anconas were entered in poultry shows in the Northeast. In the February 1915 issue of Poultry Item magazine and the 1915 American Poultry Yearbook, Anconas were mentioned in the announcements as received two first-place wins at a Boston show by Willdum Duckery of Rowley, Massachusetts. Based on this evidence, Ancona ducks are currently identified as an American breed. 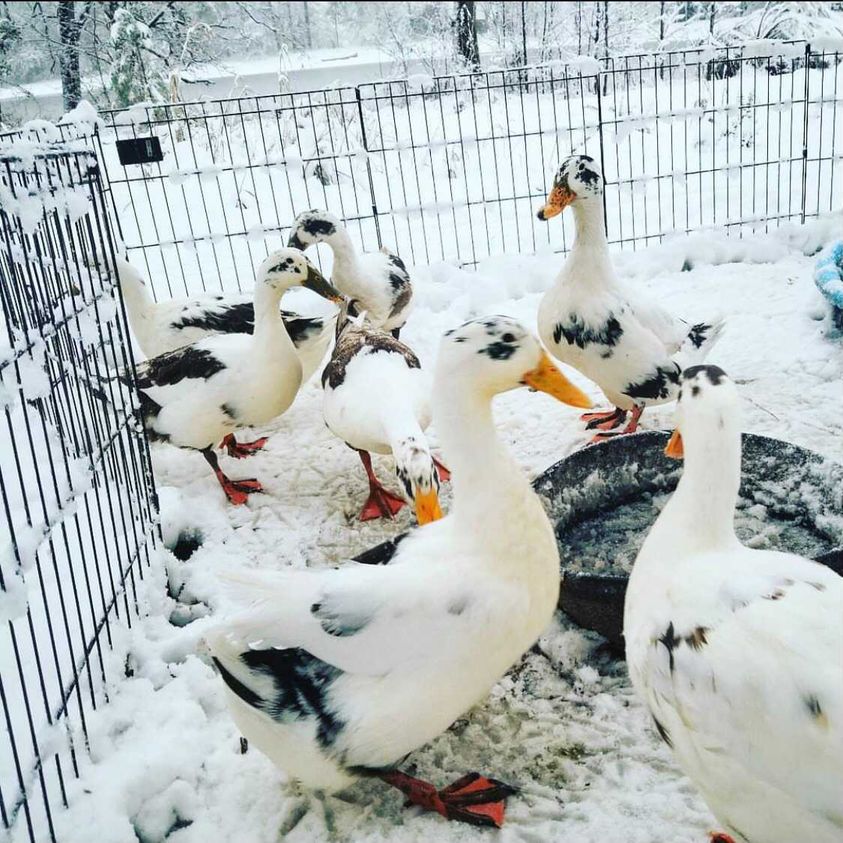 The Ancona averages 6-6.5 pounds and is a bit stockier than its close relative, the Magpie duck. It has a medium-sized oval head, a medium-length bill that’s slightly concave along the top line, an average neck that arches forward slightly, and a body carriage that’s 20-30 degrees above horizontal. The broken, mottled plumage is unique among ducks for, like Holstein cattle, there is no set design. “Any combination of white and color is acceptable as long as there are obvious broken areas on the head, backs, sides, and underbody.” (Holderread) The neck is normally solid white, bills are yellow with dark green or black spotting, and the legs and feet are orange with black or brown markings that increase with age.

“As with all rare breeds, it is especially important to choose stock birds that are vigorous, free of physical deformities, and have classic breed traits. Since it is an excellent layer, productivity should be given a high priority in breeders. To produce the highest percentage of offspring with unique patterns, select birds with definite colored areas under their eyes and at least a bit of color in their chests. Avoid specimens that are either solid white or primarily colored with a white bib.” (Holderread)

While the Ancona is not recognized by the American Poultry Association, one breeder suggests the ideal aesthetic is three-quarters white plumage and one-quarter colored.

The Ancona is a hardy, adaptable, all-purpose duck. They are excellent layers, typically laying 210-280 white, cream, or blue eggs annually. Their eggs may be larger as they mature. They don’t tend to get broody, though if they do, they are acceptable mothers. However, the best way to grow a flock will be to use an incubator.

The Ancona also grows relatively quickly and produces high-quality meat that is more flavorful and less fatty than that of most Pekin ducks. Anconas are well suited for situations where they can forage for some of their food and can eat large “banana” slugs. If they are handled as young birds, they are especially good pets, and they don’t like to roam too far. They are not fliers.

“They make excellent pond or yard ducks since they tend to stay close to home, do not fly under normal conditions, and are large enough so that they are less likely to be preyed upon by winged predators. Typically, they have moderately calm temperaments and make fine pets.” (Holderread)

There is a critical need for more conservation breeders of Ancona ducks. Their excellent laying ability, tasty meat, and calm dispositions make them a great addition to any small farmstead or backyard producer’s flock.