Notes:
Select for good mandolin body shape, the blue variety is the deepest blue color of all rabbits

The American rabbit is a multi-purpose animal developed for meat and fur. The National Breeders and Fanciers Association of America (now known as the American Rabbit Breeders Association, Inc., or ARBA) recognized the breed with an official standard in March 1918. First known as the German Blue Vienna, this name was quickly changed to American Blue because of World War I. While a number of people were showing interest in the development of an ideal blue breed, it is Lewis H. Salisbury of Pasadena, California who is given credit for producing the American Blue. Mr. Salisbury was rather secretive as to the breeds used to create the American Blue. Because of the mandolin shape of the breed called for in the ARBA Standard of Perfection, Blue Vienna, Blue Beveren, Blue Imperial and Blue Flemish Giant are likely the founding genetics for the American. 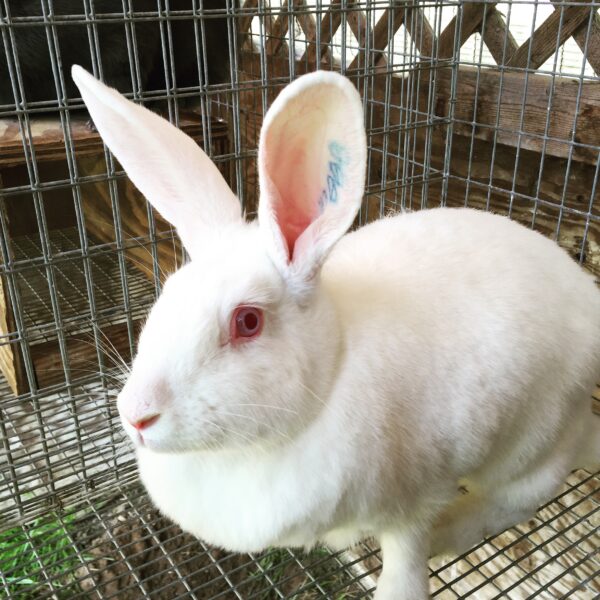 While other breeders were working to develop an all blue rabbit, Lewis Salisbury’s strain of American Blues was considered the best in the country for several years prior to 1917. In time, the ideal mandolin body type was set and the characteristic deep blue color was fixed. In the early days of development, specimens were often plagued with brown patches and many stray white hairs throughout the coat. A white variety was recognized in 1925, produced from white sports thrown from the American Blues and the addition of White Flemish Giant blood.

The popularity of the American was almost instantaneous, quickly spreading throughout the nation. By 1920, furriers were paying the unbelievable price of $2.00 for a good pelt and a breeding age doe would start at $25.00. Both the blue and white varieties maintained a popular following through the 1940’s, but by 1950 the interests of rabbit breeders had changed to others of the many breeds that had been developed or imported into this country. The American rabbit is unique and restricted to North America. The American has since become the most rare of rabbit breeds in America.

Americans are large rabbits with mature bucks weighing 9 to 11 pounds and does at 10 to 12 pounds. They are a hardy breed, docile in nature, produce large litters and are typically good mothers. Fryers make marketable weight fairly quickly and are easily kept on wire bottom hutches. The blue variety is the deepest blue color of any of the recognized breeds in America.

Notes:
Select for good mandolin body shape, the blue variety is the deepest blue color of all rabbits