Notes:
Dedicated to owner; intact jacks generally should not be kept by novice owners who do not have experience with intact equines and/or those who do not plan to breed them

The American Mammoth Jackstock was developed in the earliest days of the United States and has been an integral part of American agricultural history. George Washington was one of the leading agricultural innovators of his day. Among his many interests was the improvement of livestock, including the development of an American ass breed that could be used to produce strong work mules.

Washington, along with Henry Clay and other early American leaders, were gifted with and purchased a small number of donkeys from the finest European strains from the late 1700s to early 1800s. In 1785, the King of Spain gave Washington and Andalusian Jack, “Royal Gift”, and two jennets. Later the Marquis de Lafayette gave him a Maltese Jack. The quality and size of the donkeys bred using these animals far surpassed what Washington had been able to produce previously. Interest increased quickly, with Washington offering his jacks for stud service by 1788, and selling offspring of one jack, “Compound”, for $200 each (about $3,000 today). By 1800, large breeds of asses were found in Kentucky, Tennessee, and the Missouri territory which became the primary mule-producing areas at the time. 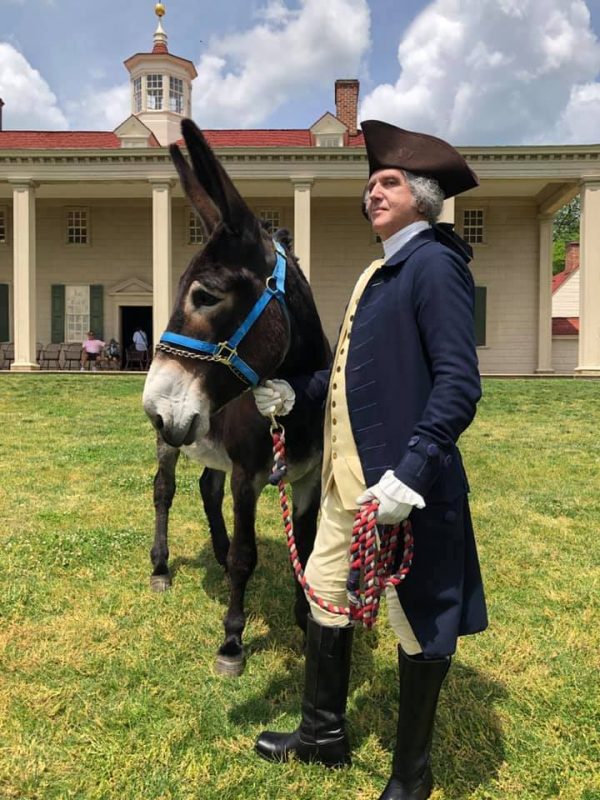 Between 1830 and 1890, several thousand large asses were imported from Europe, broadening the genetic base of the breed. The Catalonian ass from Spain was of primary interest to American breeders, but the Andalusian (from Spain), Maltese (from Malta), Poitou (from France), Majorcan (from Majorca), and Italian strains were also used. Breeders blended these strains with existing large donkeys, selecting the offspring for size, soundness, and strength.

The substantial investment in these imports demonstrates the significance of the mule industry at that time. A registry was established in 1888, and a second registry in 1908. These merged in 1923 as the Standard Jack and Jennet Registry (SJJR), which continues today under the name of the American Mammoth Jackstock Registry (AMJR). The population of American Mammoth Jackstock peaked in 1920, with an estimated five million animals in the national herd.

During the 1950s, in response to the dramatic decline in the number of American Mammoth Jackstock, the SJJR lowered the breed’s height requirements to 14 hands (56″) for males and 13.2 hands (54″) for females. When the American Donkey and Mule Society established its registry for American Mammoth Jackstock in 1967, it followed the SJJR breed standard. Interestingly, in the 1980s, when breed numbers were again increasing, the SJJR raised its height standard back to the original criteria.

This is the origin of the difference in breed standards between the two registries. The genetic effect of the lowering of the height standard is not documented, though it is true that animals that would not have been tall enough historically have been incorporated into the breed in the past 40 years. Better documentation of today’s population would be useful to determine the effect of these policy changes have had on the breed’s genetic status and conservation needs.

Mammoth Jacks are sturdy and tall, with massive legs and large, well-made heads. The ears are especially long, often measuring 33″ from head to tip. Selection has always been made for size and substance. Traditionally, males were expected to stand at least 14.2 hands (58″) high at the withers and females 14 hands (56″). However, many animals were taller than this. The weight varied with the height and ranged between 900 and 1,200 lbs. Within the breed, it is still possible to find strains that hark back to specific ancestral type.

Black used to be considered the only acceptable color for the breed, as black Jackstock bred to Percheron mares produced dark-colored mules that were easy to match as teams. For the last few decades, however, the market has favored sorrel draft mules, produced by breeding a sorrel Jack and a Belgian mare. As a result, the predominant color of the American Mammoth Jackstock has also become sorrel. With this change in color has come a change in type as well, as the sorrel animals tend to be coarser in conformation than the blacks.

Mammoth Jackstock have good feed conversion, and care must be taken to not overfeed them. They should not be fed alfalfa. Obesity in donkeys can cause problems like organ dysfunction and laminitis.

The breed has a good temperament and is docile and easy to handle. They make good pets. They are intelligent and easy to train. They are steady riding animals and do not spook easily like horses. They like to be around humans (with whom they bond) and are very sociable. However, intact male donkeys generally do not make good pets and should not be kept by anyone who does not have experience with intact male equines and/or does not plan to breed. If you want to have a pet donkey, the best choice is a female or gentle gelding.