Characteristics:
Good in most climates

American Buff geese were developed in North America and descend from the wild Greylag goose, which is native to Europe and Northern Asia. The history of this colorful bird is obscure. It may have developed from buff mutations in gray geese flocks, or it was refined from buff-colored stock imported from Europe. It was admitted to the American Poultry Association’s Standard of Perfection in 1947.

The breed is the largest of the medium-weight class of geese with mature ganders weighing 18 lbs. and mature geese weighing 16 lbs. The body conformation of the American Buff is typically European in style. It has a medium-long neck with deeply furrowed feathers. It has a chunky body with little or no evidence of a keel, a slightly arched back, and two rounded fatty lobes on the abdomen. The tail is held in line with or only slightly above the line of the back. This sturdy body is set on moderately sized legs that are set suitably far apart to provide a stable base. 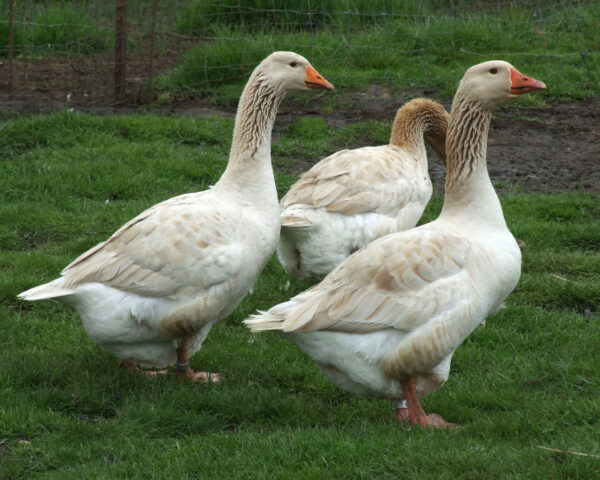 The American Buff is a lovely apricot-fawn color. The buff-colored feathers on its back and sides are edged with creamy white, and its abdomen is nearly white. Its bill and feet are orange to reddish-orange, and the hard “nail” at the tip of the bill is a pale pink. Its legs may fade to pink during laying, or when green grass is not available. The American Buff has brown eyes.

When selecting breeding stock, consideration should first be given to good body size. A medium shade of buff that is free of gray is preferred. Even color on the back is desirable, though a portion of the plumage usually is somewhat checkered or mottled, even on today’s best show specimens. Avoid breeding stock with pinched heads, small or shallow bodies, prominent keels, gray in the plumage, and excessively faded or dark color. To produce the highest percentage of offspring with correct color, some breeders have found it helpful to use ganders that are slightly lighter in color than their standard-colored mates. Ganders can be mated with three to five geese.

The American Buff makes a medium-large roasting bird. Its colored plumage doesn’t show soil as readily as that of white birds, yet its light-colored pin feathers allow it to dress out as cleanly as a white goose.

American Buff geese lay about 10 to 25 large, white eggs a year. They are one of the broodier geese and can be used to hatch and raise young from other breeds.

The American Buff is calm and docile, and they make good pets. (They do tend to be inquisitive, so it is wise to keep them in a fenced area so they don’t wander off and get in trouble.) They’re good parents, attending well to their goslings. They are good for both egg and meat production, and they do well in most climates. These attributes make the breed well suited for the average home flock.