Temperament:
Intelligent; inquisitive; some males may be aggressive

The name “African Goose” is not indicative of its place of origin. Historical studies show that the African goose has been known by many names, and its origin has been attributed to many continents. What is believed is that the African is a relative of the Chinese goose, and that both descended from Asia’s wild Swan geese. The physical differences between the substantial African and the lithe Chinese goose demonstrate the effect of selective breeding.

African geese arrived in Europe in the late 1700s, and in North America in the mid-1800s; it has been identified as a specific breed since then. The Brown African goose was accepted into the American Poultry Association’s Standard of Perfection in 1874 and the White African was admitted in 1987. 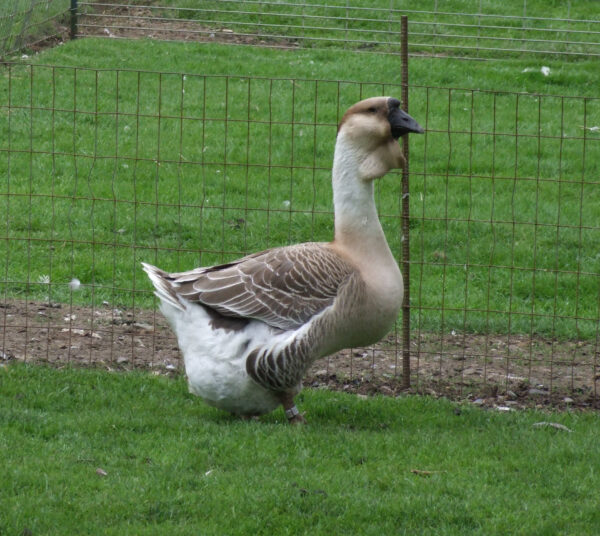 The African goose is a massive bird. Its heavy body, thick neck, stout bill, and jaunty posture give the impression of strength and vitality. Two varieties of Africans are found in North America: the colored variety known as either Gray or Brown, and the White variety. The plumage of the colored variety is a combination of browns, buffs, grays, and white. A dark brown stripe runs over the crown of the head and down the back of the neck. On mature birds, a narrow band of whitish feathers separates the satin-black bill and knob from the brown head. The legs and feet are dark orange to brownish orange. The White African has pure white plumage, an orange bill and knob, and bright orange shanks and feet.

A mature African goose has a large knob attached to its forehead, which requires several years to develop. African geese can withstand considerable cold weather but need shelter to protect their knobs from frostbite. Knobs that have been frostbitten often develop orange patches that usually disappear by fall.

A smooth, crescent-shaped dewlap hangs from its lower jaw and upper neck. The dewlap may become ragged in shape as the bird ages. Its body is nearly as wide as it is long. It is keelless and has a smooth, rounded abdomen with little or no fatty lobe development. The tail points upward and folds up neatly. The eyes are large and deep-set.

Breeding stock should be selected for vigor, good reproductive traits, proper conformation, and body carriage of 30 to 40 degrees above horizontal. Mark the goslings that grow most rapidly to be saved for future breeding stock.

“To maintain the lean meat qualities of the African, males of all ages and young females kept for reproduction should be keelless and have only moderately full abdomens. Tails held in line with the back, or lower, are often an indication of physical weakness and low fertility in this breed. Avoid birds with narrow heads, slender necks, shallow bodies, drooping tails, pronounced keels, and baggy paunches that drag or touch the ground when the bird is standing. Older females, especially during the laying season, will often have low-hung paunches and show some indication of a keel.” (Holderread, 1981).

Quality breeding stock may seem expensive but are worth the investment. In the US, smaller, moderately-priced African geese may be little more than oversized Chinese geese.

African geese are long-lived and will produce for many years under normal conditions. If well managed, they will reproduce in their first year. African geese are not the best egg layers; they usually lay 20-40 extra-large, white eggs per year. Their eggs weigh 5-8 oz. and hatch in 30-32 days. Geese form bonds with their mates, and each gander can be mated with two to six geese, depending on the individual birds.

This fast-growing breed is a good choice for a beginner. They are intelligent and inquisitive and will greet your arrival. Some ganders may be aggressive, but if African geese are socialized when they are young, they can be docile, pleasant birds with people. They are a loud breed, and not the best choice if you have close neighbors. They do best in a moderate climate as their knobs can get frostbitten.

Temperament:
Some males may be aggressive