Notes:
An American breed, developed as an “all-rounder”.  Advanced horsemen enjoy using Morgans in a variety of disciplines, ranging from dressage to working cattle.

From “What is the Morgan Horse” by Ina Ish – The Morgan horse is unique in that it descends from only one stallion, named Justin Morgan, after his owner by the same name. Originally called Figure, he was born in Massachusetts and later taken to Vermont. Figure was said to be descended from Imported Thoroughbred stock on his sire’s side, but little is known of his dam’s side. A DNA study at the University of Guelph shows that Morgans are genetically closely related to the Canadian horse breed. Figure as an adult breeding stallion, sired three sons- Sherman, Woodbury, and Bulrush who rose to prominence throughout New England. 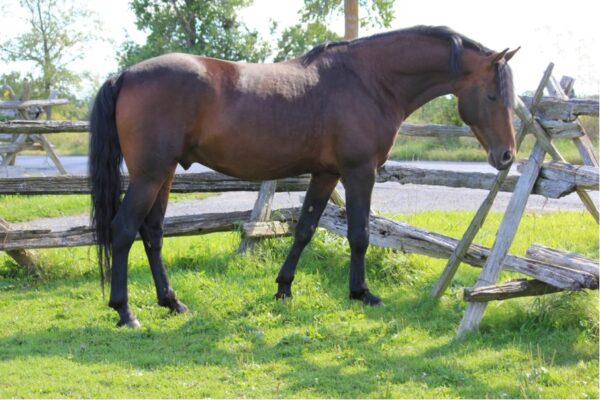 For quite some time in New England the families of the three sons were not intermingled, but bred very much within each separate son’s line. That changed of course over time, and the three families were bred to each other becoming what we now call Lippitts, Lamberts, Government, and Working Western Families.

As foremost trotting horses of their day, the Morgan blood became the foundation blood for several other horse breeds. The Quarter Horse, the Saddlebred, The Tennessee Walker, The Standardbred. Morgan blood spread all over the country- to the South , the Mid-West, the Far West, the Southwest, and the North West. They went west with the covered wagons, with the US Cavalry, were the Pony Express horses, and later the cow horses of the western ranches. The United States Government bred the Morgan Horse in Vermont, and instituted a Remount Program- assigning various stallions to ranches and Indian Tribes through-out the country to improve the stock that existed on those ranches and reservations.

As the automobile emerged in the country, the need for driving horses fell away and the US Government Morgan Farm in Vermont, under the auspices of the USDA introduced to their pure Morgan herd, bloodlines of mares who had Morgan blood, but were not fully Morgan. This was done in an effort to create a new niche for the Morgan horse, to create a taller animal who would be marketable as a riding horse as well as a driving horse. An animal which might suit the needs of the public better since the heyday of the trotting races was declining. In the meanwhile, those Morgans who had migrated to the Western parts of the country became the backbone of the cattle ranching out there.

Today’s Foundation Morgan is to be found all over the country, working cattle out west, in the Sport Horse area of competition, in the family back yard, out on the trail, and competing in Driving competitions where they are still considered the Cadillac of driving horses. In height they range from 14.1-15.2 hands with some individuals as much as a hand shorter, or taller. Colors include bay, chestnut, black to gray, palomino, cremello, buckskin, dun, and multicolored splash- like pinto colored.

What is it that sets the Lippitt apart from all other Morgan horses? Is it his physical attributes, his pedigree, presence…that special aura that seems to exude from his very being? The answer is all of these and more! A thorough understanding of the archetype Lippitt is certainly a must if one is intending to breed this unique Morgan.

Notes:
An American breed, developed as an “all-rounder”.  Advanced horsemen enjoy using Morgans in a variety of disciplines, ranging from dressage to working cattle.