The Saddleback, or British Saddleback, is a hardy and adaptable pig breed known for its ability to thrive out of doors. The name refers to the color pattern of the breed, black with a white band of varying width around the shoulders. The Saddleback’s lop ears distinguish it from the similarly patterned Hampshire. 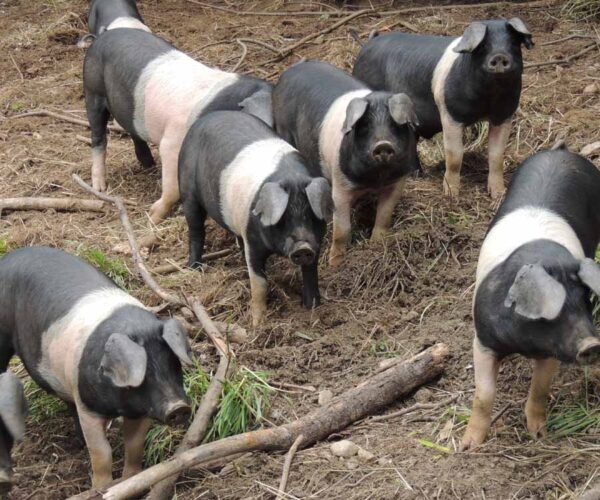 The modern breed originated in 1967 from the combination of two historic breeds of southern England, the Essex and Wessex (sometimes called the Wessex Saddleback). Both of these breeds had been imported to the United States in the early 1800s. The Essex later became extinct in this country, but the Wessex, a belted breed, became the primary foundation for the American Hampshire breed. Thus, the Wessex, ancestor to both the Hampshire and the Saddleback, was the source of the belted color pattern in both breeds.

Saddleback pigs have traditionally been managed on pasture, and they excel in foraging ability and maternal qualities. They have also been used in commercial crossbreeding systems, especially with Large Whites (called Yorkshires in North America). Today there are about 600 Saddleback pigs in Britain. The breed is slowly increasing in numbers, and it would benefit from a resurgence of the raising of pigs on pasture.

Saddlebacks have been imported into the United States on several occasions, although the stock has generally been absorbed into other breeds and has not been maintained as a pure population. As a result, the number of Saddlebacks in the United States is very small. There is no active breed association or accurate information about the breed’s status. It may be necessary to import breeding stock if the Saddleback is to survive in the United States.