Rocky Mountain horses actually hail from the Appalachian region of eastern Kentucky and were one of the foundations of the family of breeds that developed there. Kentucky was geographically significant, as its central location meant Spanish horses from the South and Southeast could easily be crossed with English horses from the East. This genetic combination would result in all of the gaited breeds developed in the United States, including the American Saddlebred and Tennessee Walking Horse. 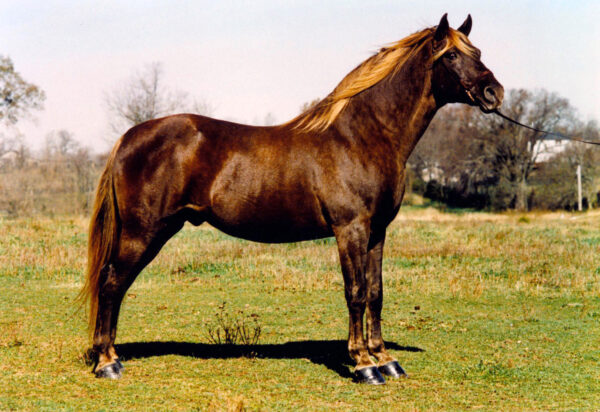 Gaited horses are those which naturally have gaits other than, or in addition to, the walk, trot, and canter of all horses. They may include the rack, single foot, and running walk, which are more comfortable for the rider than the trot. Spanish horses likely contributed this characteristic to American breeds.

The Rocky Mountain was also shaped by its early uses in the limestone plateau and mountains of eastern Kentucky. Horses were expected to be adaptable and versatile, easy keepers, rugged. sure-footed, and willing in disposition. The breed reflects the primitive gaited horse type and may be ancestral to modern breeds developed later.

The breed name distinguishes a specific strain of gaited horses that descended from a stallion brought into eastern Kentucky from the West around the turn of the century. The stallion was bred to native mares and the most famous of the offspring, Old Tobe, was considered to be the foundation sire of the breed. Old Tobe was owned by Sam Tuttle, who for many years operated the concession for horseback riding in the Natural Bridge State Park in eastern Kentucky. Tuttle put the timidest riders on Tobe, for he had smooth gaits and gentle temperament. Tobe was also used as a breeding stallion until the age of 37 and figures in the pedigrees of many of today’s Rocky Mountain horses.

The Rocky Mountain Horse Association was formed in 1986 through the efforts of Rea Swan of Lexington, Kentucky. She worked for several years to understand breed history and locate remnants of the breed and establish a registry to record pedigrees. The Rocky Mountain has grown quickly, as it fits the current market for easy riding, gentle family pleasure horses, and now numbers about 10,000.

As a landrace breed, the Rocky Mountain is somewhat variable in type. Some horses have very Spanish features while others appear more like the larger, modern breeds. Consistent among all is a smooth four-beat gait and a calm, friendly disposition. The horses stand 14.2 to 16 hands at the withers and weigh 850 to 1,000 pounds. Most of the solid colors known in horses occur in the breed, including gray and roan, though chocolate of varying shades with a flaxen mane and tail is the most popular. Spotted individuals occur occasionally, but they are not accepted by the registry. The Rocky Mountain is closely related to Mountain Pleasure horses and many are included in registries of both breeds.