Temperament:
Docile, can be assertive

Canadienne cattle are one of the few historic livestock breeds developed in Canada. They descend from the cattle of Normandy and Brittany, which were brought to Canada between 1601 and 1660. This population was shaped by natural selection in the rugged environment of eastern Canada, and the resulting breed became known as the Canadienne. The breed is closely associated with Quebec, where the majority of the cattle can still be found.

Canadiennes were the dominant dairy cow in eastern Canada until the importation of improved European breeds in the early 1800s. In 1850, the Canadian government officially discouraged the use of the Canadienne in favor of “improved breeds.” The policy was then reversed in 1883 and the breed was again recognized for its superior environmental adaptation. Pure breeding was again encouraged, and a herd book was established in 1886. 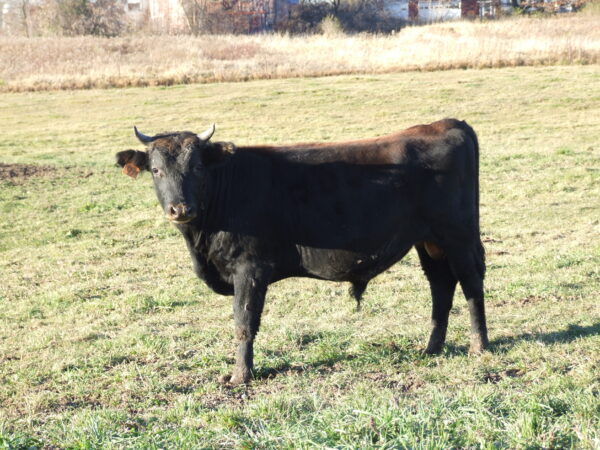 The breed flourished for several decades but became rare once more during the early to mid-1900s. The dairy industry’s emphasis on high rates of production and the use of confinement husbandry left the Canadienne unable to compete with the Holstein. Brown Swiss genetics were introduced to increase milk production, though the result diluted the characteristics of the Canadienne without any market advantage gain for the breed. Fortunately, pedigrees were documented, and some cows continued to be bred to purebred bulls, sustaining pure stocks in addition to those with Swiss breeding.

Canadiennes are typically black, brown, tan, or russet with a pale fawn muzzle and udder. Many have a lighter-colored stripe along the back. The black-tipped horns curve up and turn back toward each other. Cows weigh 1,100 lbs. while bulls are 1,600 lbs. Milk production averages 15,000 pounds per lactation, with about 4.35% butterfat and 3.7% protein. Most significant is the breed’s ability to produce milk on poor forage and under very challenging conditions. Few dairy breeds demonstrate this combination of hardiness and productivity as well as the Canadienne.

The Canadienne breed is critically rare and, while some exist in the US, most remaining herds are found in and around Quebec. The breed merits attention for use in grass-based dairying, especially in areas with low-quality forage. Under these conditions, the Canadienne can demonstrate its value to dairy farmers and gain broader support.