Introduction
For this study, there were 2,283 red wattles with registration data. The early data, from 1984-1998, was a collection of records from the Wengler, Prentice and Animal Research Foundation (ARF) registries. Later records, from 1999 to the present are from the Red Wattle Hog Association. The early records were used to establish a pedigree, but analysis for this study concentrates on the 1,932 pigs registered from 1999 to 2013. The pigs registered in 2014 were excluded from the study because it was not a complete year of data. The purpose of this study was to monitor the health of the breed by investigating trends in registration and inbreeding. 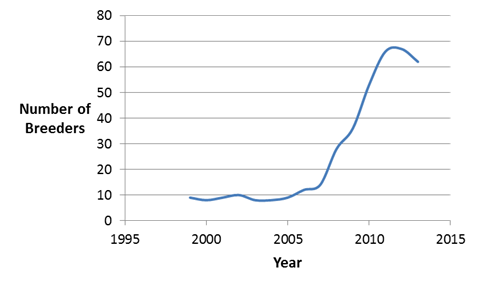 The number of pigs registered per year has also increased with the most registered pigs born in 2012, 288 pigs. 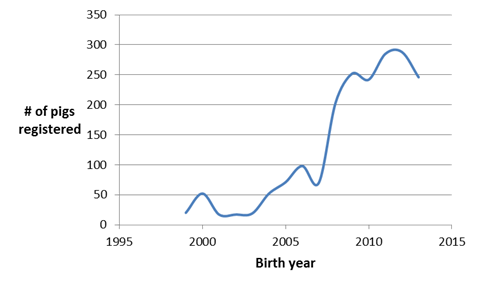 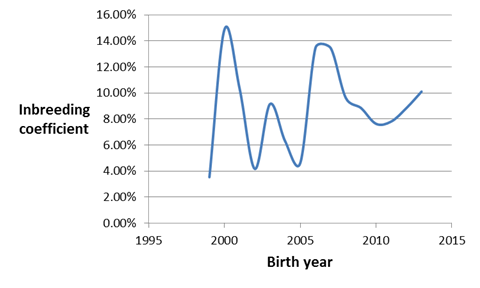 In general, the population seems to be healthy. The high number of breeders registering their pigs and the overall number of pigs is encouraging. It would be beneficial to the registry if breeders continue to register for more than 3 years. Clyde Grover is the only breeder that registered consistently from 1999 – 2013.

The original Wengler line was bred with the Prentice line in about 1984, before the founding of the RWHA registry in 1999. Among the animals first registered, crossing between the two lines was clearly being done on most farms, so it seems unlikely that any pure Prentice or pure Wengler lines are still in existence. More information about maintaining bloodlines can be found in the article Bloodlines Within Breeds, by Dr. Phillip Sponenberg, published in the RWHA Winter 2013-14 Newsletter.