Introduction
Ossabaw Island pigs were brought to the mainland intermittently from 1978 to 1990 from an island off the coast of Georgia. Of these island caught pigs, 14 boars and 17 sows became the foundation lines for the breed registry. All modern registered Ossabaw pigs therefore come from these lines. Over the years, some of the lines may have died out, while others may have been overused and inbred. Therefore, there were two major objectives for this project. The first was to determine the level of inbreeding in the population, as well as, look at trends in registration since the establishment of the registry. The second was to determine the overall breeding structure of the population by finding out which original foundation lines are still active in the current population. This allows us to establish breeding recommendations and determine which lines should be used to maintain a high level of genetic diversity in the population.

Breed overview
Since the studbook was started in 1986, there have been 40 breeders and 561 animals registered total. For this analysis we considered active animals the 382 pigs that were born from 2004 to 2013. During this time, 25 breeders registered their Ossabaws. The number of breeders registering each year continues to increase. 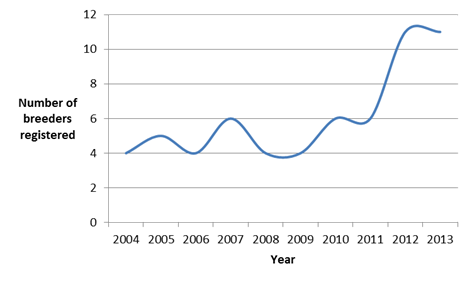 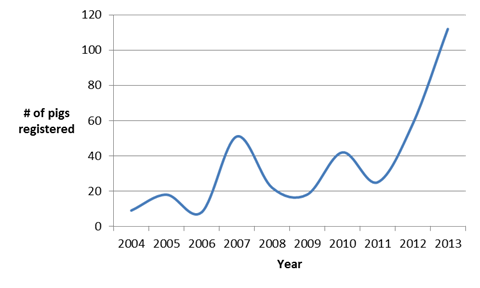 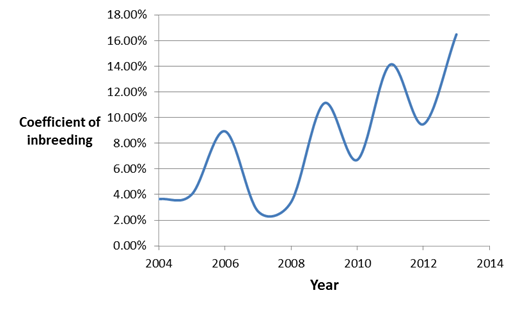 The increase in the number of pigs being registered and the number of breeders registering is encouraging. However, in general, the level of inbreeding in the population is too high. Some large breeders, like the Mount Vernon Ladies Association (MVLA), have managed to keep a 0% inbreeding coefficient while registering 109 pigs. In the last ten years, 11 of 25 breeders had a coefficient of inbreeding of greater than 10%. It is possible to reduce this number by using different breeding strategies. For information on breeding practices that minimize the level of inbreeding in any size of herd, refer to the book Managing Breeds for a Secure Future: Strategies for Breeders and Breed Associations by Dr. Phillip Sponenberg and Dr. Donald E. Bixby.

Out of the five foundation lines that are definitely active, Clifford and Neil have the least number of registered descendants. It would be beneficial to increase the use of these lines to increase genetic diversity.

There does not seem to be much indication of popular sire syndrome. Leopold, from the Clifford line, was the top producing sire from 2006 to 2009, fathering 38% of the pigs registered during those years. Although this is high, it has saved the Clifford line. Clifford also had two female offspring that were sold to a breeder that no longer registers. Their descendants may therefore still be active. Only one other sire, Ivan, was the top producing sire for more than 1 year. He was top producing from 2004-2005, fathering 37% of pigs registered, but there were fewer pigs registered during those years.

Mystery Sire Lines – the pedigrees of these sire lines is unknown, so they cannot be traced to foundation sires

0126 and CF are well represented in the current population. The descendants of CC1 and MV are the least represented of the active sire lines in this group.  0039 is said to have island bred parents, but was not given a foundation number. His descendants, should they exist, could be especially important to find as an island-bred animal. 0088, which was sold to a breeder in Canada, could also be an important line, if we can open communication with this breeder. 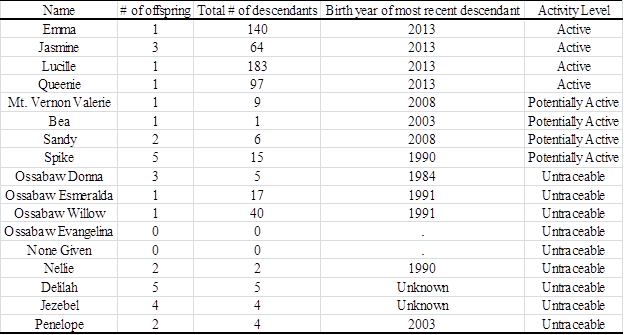 Of the 4 definitely active dam foundation lines, Queenie and Jasmine have the fewest registered descendants. It would be beneficial to use sires from these lines to ensure the lines are maintained for future generations.

The potentially active lines are especially frustrating, representing genetics from a significant fraction of the foundation dams that has flowed into the unregistered segment of the Ossabaw population.  It is well established that many breeders of purebred and crossbred Ossabaw hogs do not register their pigs.  Because these cannot readily be distinguished, this represents a significant loss to the registered breeding population.  At this stage in the breed’s redomestication history, it may be suitable to consider a program to recover some of these breeding lines into the herdbook through a well managed recovery program.