Introduction
The Large Black Hog originated in England from the Old English Hog and black pigs from Asia. The breed is known for its large size, mothering ability and foraging ability. This breed is able to thrive in cold weather and in a pasture setting, which is beneficial for outdoor operations, where it is regaining favor.  Large Black Hogs were originally imported to the United States in the 1920s.  In the United States the Large Black Hog is represented by two breed registries, which have been instrumental in maintaining the success of the breed.

Breed overview
The registry database was received from the Large Black Hog Association and includes animals that were born from 2003 to 2014.  The Large Black Hog Association was founded in 2009, so pigs with earlier birth dates are animals included for historical purposes from the pedigrees of the first registered animals.  In all, the database used for this analysis included 5,441 pigs which included litter registration records.  For this study, we looked only at animals that are registered as possible breeding animals in the Large Black Hog Association registry. This includes animals that were born from 2009 to 2014 for a total of 1,325 pigs.
During this time there were 168 unique breeders. The number of breeders registering their Large Black Hogs by birth year continued to increase until 2012. The number then decreased in 2013 and 2014 to 60 and 35 breeders, respectively. This could be the result of some breeders no longer registering breeding animals or leaving the business completely. Either option is concerning for the well-being of the population. 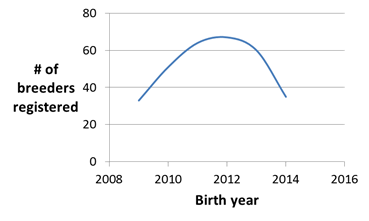 The number of pigs registered per year rose steadily until 2011 and since then has started a drastic decline, mirroring the loss in number of breeders. In 2014 there were only 123 breeding animals registered which is 152 pigs less than the number registered in 2011. 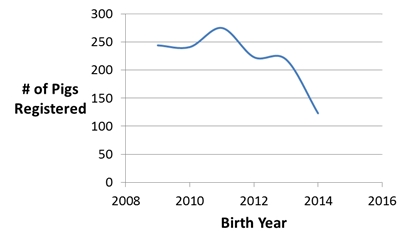 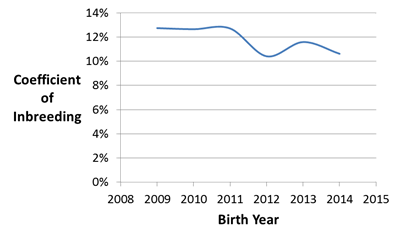 Bloodlines
Based on the association database there were 6 boar and 7 sow bloodlines present in the United States from 2003 to 2014. The boar lines include: Noble Sam, Majestic, Super, Longfellow, Defender, Iowa Alrose Malcolm. The sow lines include: Prudence, Matilda, Warbler, Charlotte, Daisy, Skylark and Sunshine. Since 2009, there have been no breeding animals registered with the names Malcolm, Skylark and Sunshine.
The following graphs show the number of registered animals from each bloodline registered by birth year. 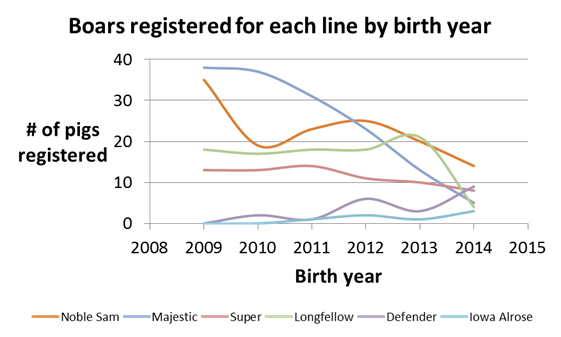 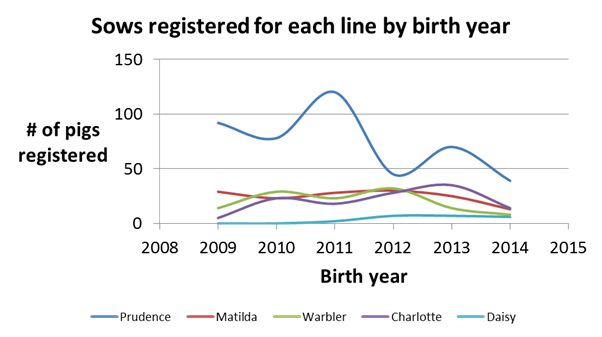 There are some interesting trends to report for these graphs. Starting with the boar lines, Majestic has been the most popular sire line since 2009, with Noble Sam not far behind. Both lines have sharply declined over the years, although Noble Sam was fairly consistent from 2010 to 2014. Longfellow and Super had 18 and 13 boars registered respectively in 2009. Defender and Iowa Alrose were registered later in the association history but have continued to increase in the number of pigs registered. In 2014, Defender, and Iowa Alrose increased while the other 4 lines decreased. This shows that the breeders are doing an excellent job of incorporating the newer addition boars to existing breeding programs; however, the numbers of pigs registered with the names Majestic and Longfellow are now underrepresented. Part of the reason for this is because the number of boars registered in general in 2014 was low but it is important to make sure all of the boar lines stay active in the population. They all have important genetic material to contribute to the breed.

The sow lines show some similar trends. There are five lines present in the current population. Traditionally Prudence was the most popular bloodline, and although still very popular, Matilda, Warbler, Charlotte and Daisy are now more equally represented in the population. All of the sow lines decreased in number from 2013 to 2014, and Prudence decreased the most drastically dropping from 70 to 39 breeding females registered. With numbers low for all sow lines in 2014, there is a need to focus on the Daisy and Warbler lines to ensure that their genetic material is maintained in the population.

Popular Sire Syndrome
When looking at the most popular sire each year (sire with the most offspring born each year), there does not seem to be much indication of popular sire syndrome. In 2009, one boar sired 10% of the breeding pigs born that year, but the percent of pigs by the most popular sire has decreased since then. There is also a different sire that is the “top sire” every year, which indicates that sires are not being overused.
One slight concern for sire selection is that boars from the Noble Sam line were top producing sires for two years, and tied for the top producing sire two more years. It is fantastic news that the Longfellow and Super lines were also represented as top producing sires. While there does not seem to be any indication of popular sire syndrome in the population, attention to the use of all boar lines is recommended.

Summary
The number of breeders registering and the number of pigs registered each year has been on the decline in recent years. It is necessary to identify and correct factors contributing to these changes, continue to recruit new breeders and stress the importance of breeding animal registration. This record keeping allows the breed to maintain genetic diversity and ensure that the breed continues to thrive. Although there is some work to do to reduce the level of inbreeding in the population, the average coefficient of inbreeding has decreased since 2009. This is great news for the breed! If breeding trends can be quickly reversed, the breed seems poised for a happy and healthy future.