Introduction
The Gloucestershire Old Spots were originally brought to the U.S. in 1996. These 20 animals imported by Kelmscott Farms became the foundation animals for the breed in America. The pigs represented each color group in the cyclic breeding system put in place by the British breeders that is still used in the U.S.by many breeders.

Breed overview
When considering the active population, the figures analyzed were provided by the Gloucestershire Old Spots Association in summer of 2013. The numbers may be larger than described here, as 2013 marked the launch of a second breed association, the Gloucestershire Old Spots Pig Breeders Union. There have been 53 unique breeders registering pigs between 2008 and 2013. Of these 53 breeders, 32 were still registering in 2012 or 2013. The number of breeders registering per year is increasing which is encouraging. 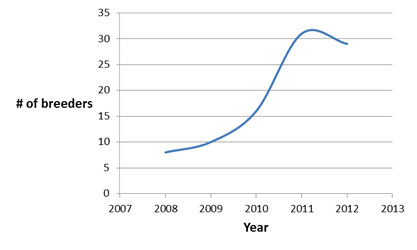 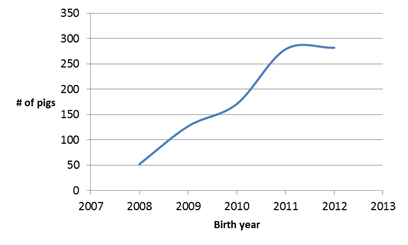 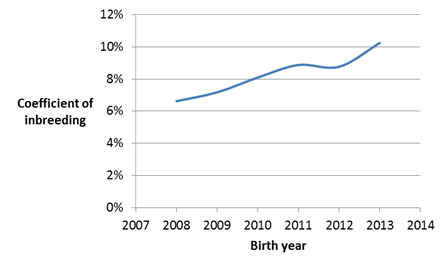 There are some methods to decrease the level of inbreeding in the population. The easiest method would be to refrain from mating brother and sister, mother and son, and father and daughter.  Careful record keeping can help prevent matings between more distant relatives.

The number of animals with each name per color group born from 2008 – 2013 is listed in the following table.

Between 1996 and 2008 the names Josephine and Muriel were lost in the analyzed data. It is important to get these name groups back in the population, if possible. Unregistered Josephines and Muriels would lend genetic diversity to the green group. The black, blue and red groups each have one female naming group present in their current population, which is detrimental to the genetic diversity of the population. Unregistered descendants of other female naming groups would be beneficial to the population if their lineage could be proven.
The number of registered animals is very different between color groups. 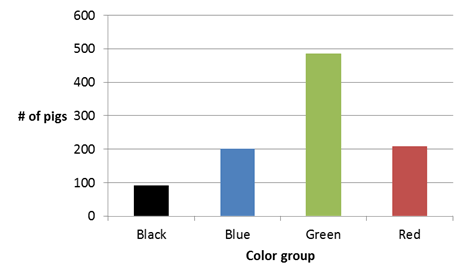 The red and blue groups are pretty similar in number; however, the green group has over double the population of the other two groups. In order for the cyclic breeding system to work, there needs to be animals present from each group. The GOS breed as a whole would benefit from the breeding of more of the black color group.

The coefficient of inbreeding also varied greatly between the color groups from 2008-2013.

Some breeders have begun breeding schemes that do not use the color system. They are relying on assessment of Coefficient of Inbreeding (CI) when selecting breeding stock. This method can be used to reduce overall inbreeding, but shouldn’t be the only criteria for selection of herd sires and dams. Individual animals of superior type whose CI is relatively high can be effectively used in breeding by mating to unrelated animals. By reviewing pedigrees before proposed matings, breeders can assess the number of common ancestors to avoid close breeding. This can be done using the “trial breeding” option in Breeders Assistant, and this service is provided online by the breed associations. It is possible to create multiple trial matings so CI’s can be compared and the best decision can be made. When possible, matings should be chosen that either ensure that rare genetics are maintained in the herd or breed, or that complement selection traits. For example, an inbred sow with narrow shoulders might be bred with an unrelated boar that is exceptional in his shoulders, so that this trait is improved in her offspring.

Breeders should also be cautious of relying too much or too long on a particular boar. A breeding herd can be divided “on paper” into a three-herd rotation of boars to maintain diversity. Or, by choosing replacement boars each year from relatively unrelated sows, the inbreeding impact of using a single boar for many years can be avoided.  See “A Conservation Breeding Handbook” (Sponenberg & Christman, 1995) for more details.

Overall, there are some great trends in the GOS breed. The increase in the number of pigs and breeders registering is very encouraging. There is a little work to do to decrease the level of inbreeding. For information on breeding practices that minimize the level of inbreeding in any size of herd, refer to the book Managing Breeds for a Secure Future: Strategies for Breeders and Breed Associations, by Dr. Phillip Sponenberg and Dr. Donald E. Bixby.
The low number of female naming groups from each color group is concerning. The 1996 importation contained sows from 15 female naming groups. Data from this analysis, from 2008-2013, show only 4 female naming groups remain. The current population of 986 animals represents only 26.7% of the female foundation lines. This is a huge loss for genetic diversity in the population and may help explain the high level of inbreeding. Unregistered females that have lineage that can be proven could be greatly beneficial to the GOS breed.