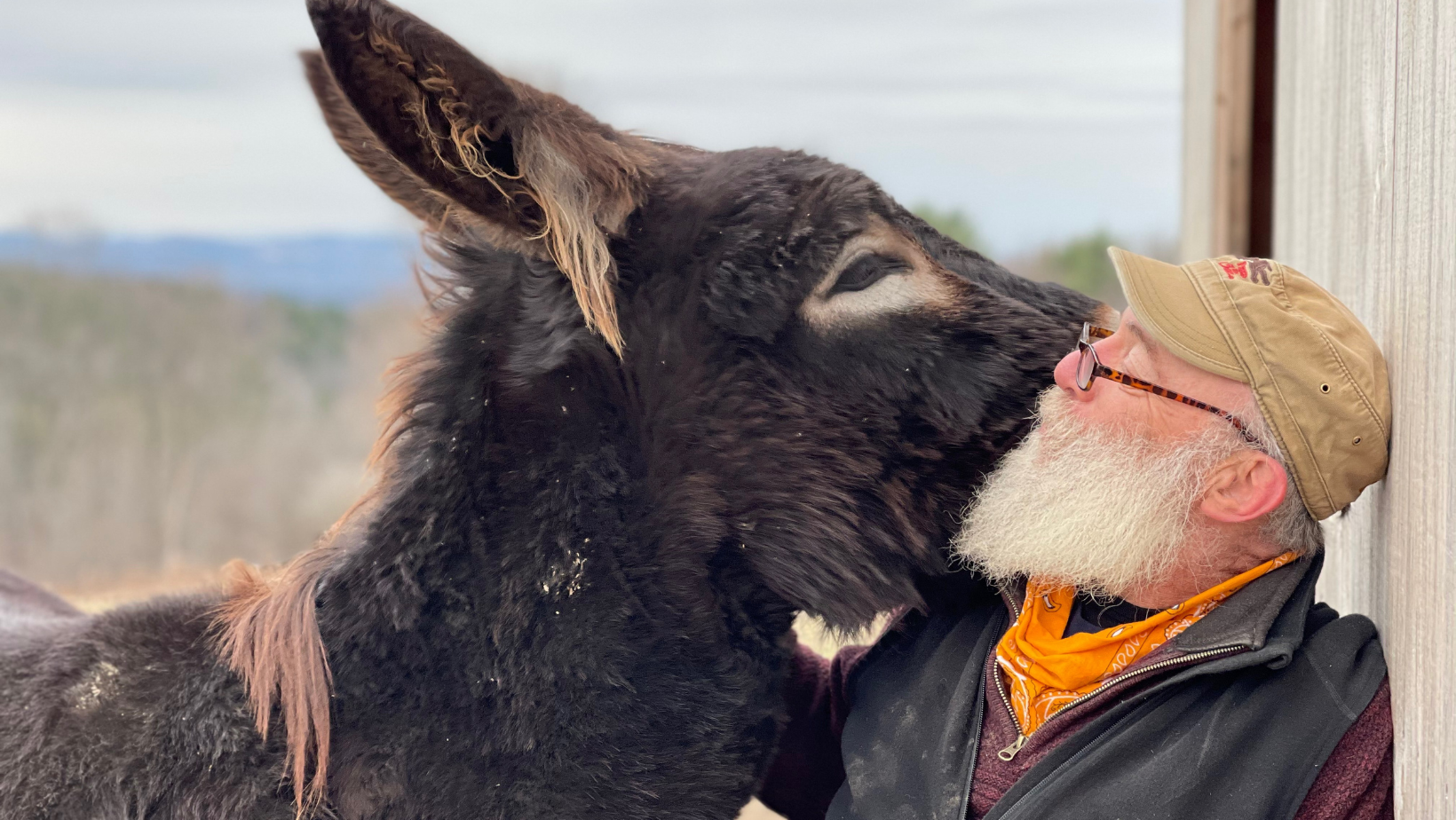 Heritage breed farm animals, including American Mammoth Jackstocks, are becoming increasingly endangered as the modern agricultural system prioritizes efficiency and continues to scale up production. To save these breeds from extinction and preserve biodiversity, they need roles in our food and agricultural systems.

One local business, Vermont Compost Company, has a creative solution – it uses a team of three American Mammoth Jackstocks to pull a cart through downtown Montpelier, picking up food scraps from local businesses.

Vermont Compost Company was founded in 1992 by Karl Hammer, a member of The Livestock Conservancy. At their hilltop farm in Montpelier, they compost community food scraps, manure, silage, wood chips, and bark to produce high-quality, living compost and potting soil for organic growers.

American Mammoth Jackstock donkeys play an integral role in operations at Vermont Compost. Karl’s first team of donkeys arrived at their Main Street site in 1996. Since then, their herd has grown to include seven donkeys and a mule.

More than a Logo

Vermont Compost’s herd functions as more than curious lawn ornaments. They contribute to operations at nearly every stage of business. Their donkeys offer a compost contribution by converting pasture land into rich, biologically active manure. Compared to other sources, equine manure is rich in organic matter and nitrogen. One of the keys to their compost recipe is its diversity of inputs, from food scraps, bark, and wood chips, to equine, bovine, and avian manures.

The donkeys also function as draft animals. Twice per week, a three-member team pulls a cart to town, picking up food scraps from locations around the city. Vermont Compost been making this trip with donkeys on and off since 1996, whenever they have experienced staff to guide the animals and when the weather cooperates. The current team brings about 2,000lbs of food scraps to their site each week. Pickup locations include a distillery and a retirement community.

In this fast-paced and short-sighted world, some may see a donkey-pulled cart as a quaint marketing stunt. It’s anything but.

We believe that the era of fossil fuels will one day come to an end. It is therefore imperative to invest in alternative forms of energy. Draft animals are the original solar-powered vehicle, converting forage and water into donkey-power. When well cared for, equines serve as a renewable resource. 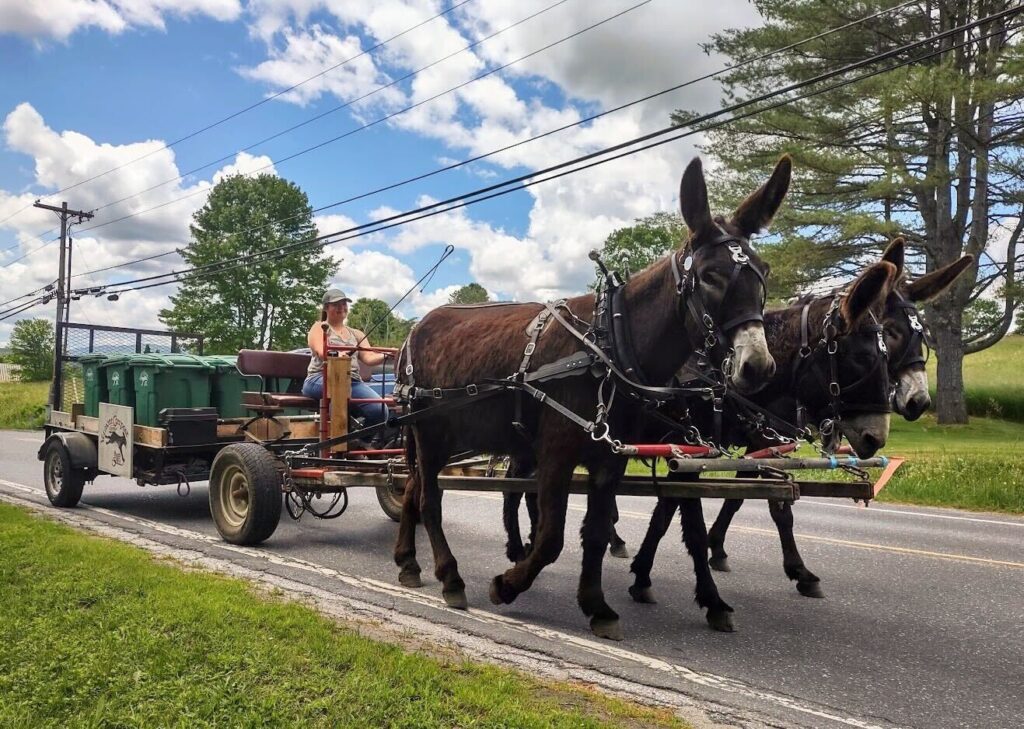 The team in action, courtesy of Vermont Compost Company

American Mammoth Jackstocks are critically endangered heritage-breed donkeys. George Washington, one of the leading agricultural innovators of his day, developed the American Mammoth Jackstock. Washington, along with Henry Clay and others, were gifted a small number of donkeys from European breeds which they used to create the breed. These sturdy donkeys are mainly used to produce draft and riding mules.

Mammoth Jackstock are one of an increasing number of endangered heritage breeds, as industrial farming systems continue to value uniformity over diversity in livestock. In 2006, the United Nations Food and Agriculture Organization (FAO) estimated that we lose an average of 2 domestic animal breeds each week. In the past fifteen years alone, the FAO has identified the extinction of 300 out of 6,000 breeds worldwide, with another 1,350 in danger of extinction. The Livestock Conservancy publishes an annual Conservation Priority List for heritage breed livestock and poultry with the categories “Critical,” “Threatened,” “Watch,” and “Recovering.” This list is a tool to decide which heritage breeds take priority for conservation efforts based on their level of endangerment.

To ensure long term success, Jackstock bloodlines must be enriched with intentional breeding to select for the characteristics that make a healthy, capable draft animal. Vermont Compost Company has welcomed 4 donkey foals to our fold, and the newest arrival will be born in 2023.

Caring for, training, and safely leading a team of donkeys requires a specialized skill set. Analiese, the current herd manager for Vermont Compost, grew up leading teams of oxen with her grandfather. She’s one of a small number of young people working to preserve this heritage knowledge for future generations.

The process they use to train a draft animal takes years and is focused on animal and human safety. Jake, who was born in 2021, began his training this year by learning to lead with a halter and rope. As he masters this skill, Analiese will begin to teach him the basic commands: step up, woah, gee, haw, and back.

Over the next few years, Analiese will slowly introduce Jake to wearing the full harness and being guided from behind. Once he becomes comfortable with ground driving, he will work alongside a team to pull lightweight loads. Jake will reach his full size and  be almost four years old before he begins pulling full loads, with plenty of training under his belt.

A Future for Food Systems

For Vermont Compost Company, the question “Why donkeys?” comes down to a question of imagination. “Are we willing to imagine a world beyond fossil fuels? Are we ready to prepare for that world today?”

By working with heritage donkeys, they are supporting a more resilient, future-oriented local food system.

Emma Marks works for the Vermont Compost Company as their Marketing and Sales Associate. Emily Rose Johnson is the Communications Coordinator for The Livestock Conservancy. 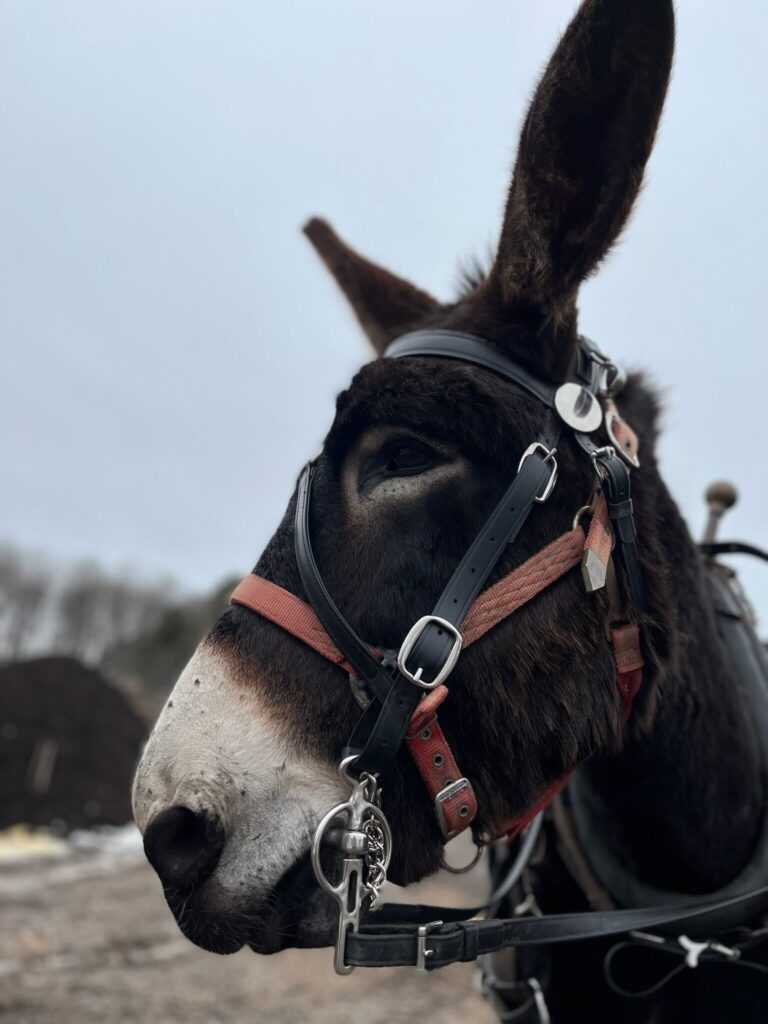